by AglaSem EduTech
in Gujarat

Latest – Provisional Select & waiting List after After the completion of the document verification for Lokrakshak recruitment has been announced.

Click here for Provisional Select & waiting List after After the completion of the document verification for Lokrakshak recruitment.

Merit list of written and physical test (without checking original documents) will be declared on 25 Feb 2017. Till now the recruitment board has worked paperless without checking any document. For document verification approximately 35,000 candidates will be called, for which call letters can be downloaded from 27 Feb 2017 to 05 Mar 2017.

Click here for Final Result of Lokrakshak (Constable) Recruitment Written Exam conducted on.23-10-2016 after completion of rechecking of OMR Sheets.

To know the Gujarat Police Lokrakshak Result as per Roll No. Please click on the relevant Roll Number range below.

All those candidates who have secured 40 or more marks in Written Exam will be called for physical tests (PET/PST).

As per the Rule 15 of The Police Constable, Class-III (Combined Competitive Examination) Rules-2016 total 45 candidates have been provisionally disqualified in the written exam for further details. 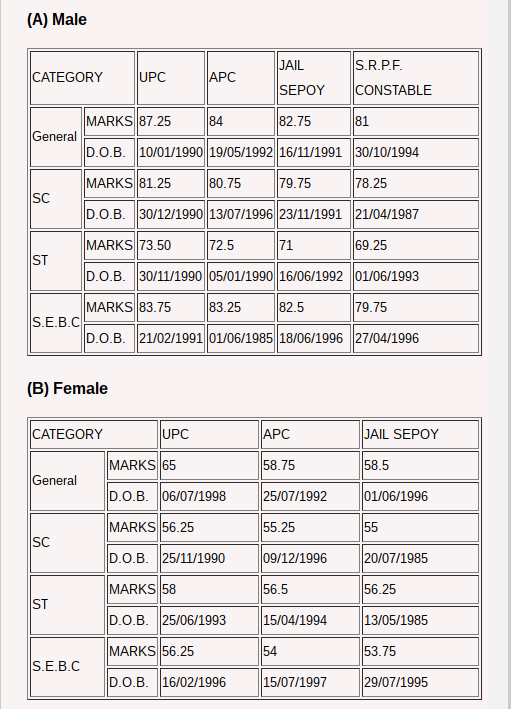 Those Candidates who want to get their written exam OMR Sheet re-examined, all such candidates (SC, ST, SEBC & General) shall have to submit an Application with his/her Hall Ticket (Call Letter) and a Nationalised Bank Demand Draft of Rs.300/- in favour of “Chairman Lokrakshak Recruitment Board” CHAIRMAN, LOKRAKSHAK RECRUITMENT BOARD” Payable at VADODARA. latest by 14-12-2016 either personally or by post at the following address: Chairman, Lokrakshak Recruitment Board and I.G. of Police, Vadodara Range, Kothi Building, Raopura, Vadodara-390001.

Those candidates who forgot to fill NCC/RSU/Widow certificate details online and wants to get extra marks as per rules at this stage, then they can submit application with self attested certificate by 14-12-2016. After that no such application will be entertained.

For extra marks in Sports, if any candidate forgot to fill online details and wants to get additional marks as per rules then such candidates have to submit the certificate from the concerned District Sports Officer certifying that the concerned candidate is eligible for extra marks for Sports as per Government Rules. Such certificate has to be submitted to the Board latest by 14-12-2016.

If any disqualified candidate wants to appeal against his/her disqualification, he/she may either in person or by written application represent before the “Chairman, Lokrakshak Recruitment Board and Inspector General of Police, Vadodara Range, Kothi Building, Raopura, Vadodara-390001” free of cost by 14-12-2016. Such Candidates shall be shown the evidence of the such disqualification like CCTV Footage etc. in person. No separate written intimation to any candidate in this regard will be given. After 14-12-16, no application by the disqualified candidate shall be entertained.

Candidates who have appeared in the examination can check their Gujarat Police Result for Constable Recruitment from here by follow the below steps.

Candidates need to score the qualifying cut off marks as per the category-wise such as general, OBC, SC, and ST. The cutoff score is considered to be the lowest possible marks that students must score to get selected for Gujarat Police Result 2016-17.

If you have any queries regarding Gujarat Police Constable Result 2016-17, please ask in comments below.