KSET Admit Card 2017 could be downloaded just after the two working days of submission of the application form and now the Roll number allotment lists who have registered online for KSET examination, have been issued to the respected centers, candidates are advised to check the allotment lists. KSET 2017 will be conducting tests in 39 subjects at eleven (11) Nodal Centers spread across the Karnataka state. After the completion application process, eligible candidates were able to download their KSET Admit Card 2017 as per the official announcement. Candidates can check all the details regarding KSET Admit Card 2017 from this page below.

NIMS University Application Form
Latest: The Roll number allotment lists have been released, check the lists from the links given below.

KSET 2017 Admit Card is also known as Admission Card and was released by the official along with the application form, on the website. Candidates were able to download it from the official website after filling the application form. Candidates have to take this admit card on the day of examination i.e., December 31, 2017 or they will not be allowed to take the examination. 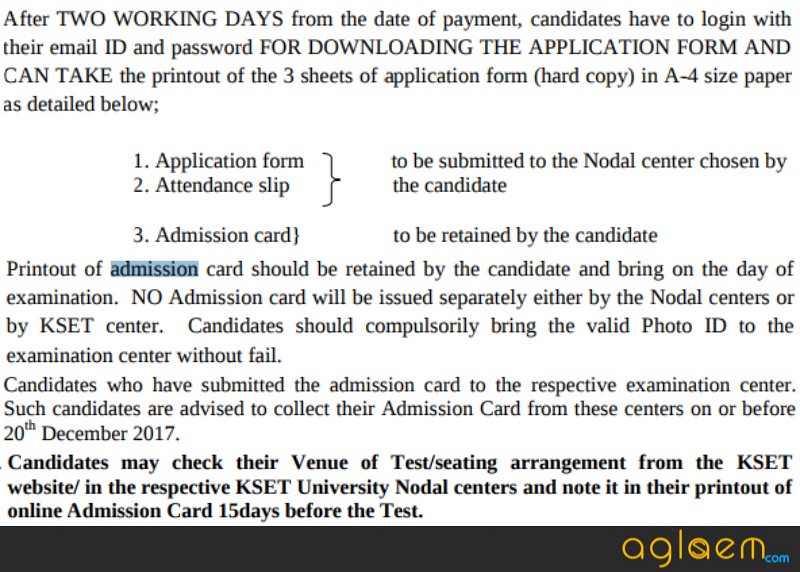 Paper-I: General Paper is on Teaching and Aptitude:

The Eleven KSET Nodal Centers where test will be conducted in Karnataka State with their respective codes are given below. The candidate can select any one Test Center for KSET examination.

Note: Please note that test center once selected is final and will not be allowed for change of center under any circumstances.