by Anwesha Bose
in Rajasthan Eligible candidates can apply for PHED Rajasthan Recruitment 2016 ITI Technician posts. Interested candidates should understand eligibility requirements such as age limit, educational qualification. After applying, candidates can obtain admit card for selection stage. On clearing all stages of selection, candidates will be recruited to applied posts.

Latest news – As per another news report (news advt image below), there are a few changes in Rajasthan PHED Recruitment 2016. Number of vacancies, posts have been revised. Furthermore, dates for applying are being shifted to November.

Previously, below notification was available. 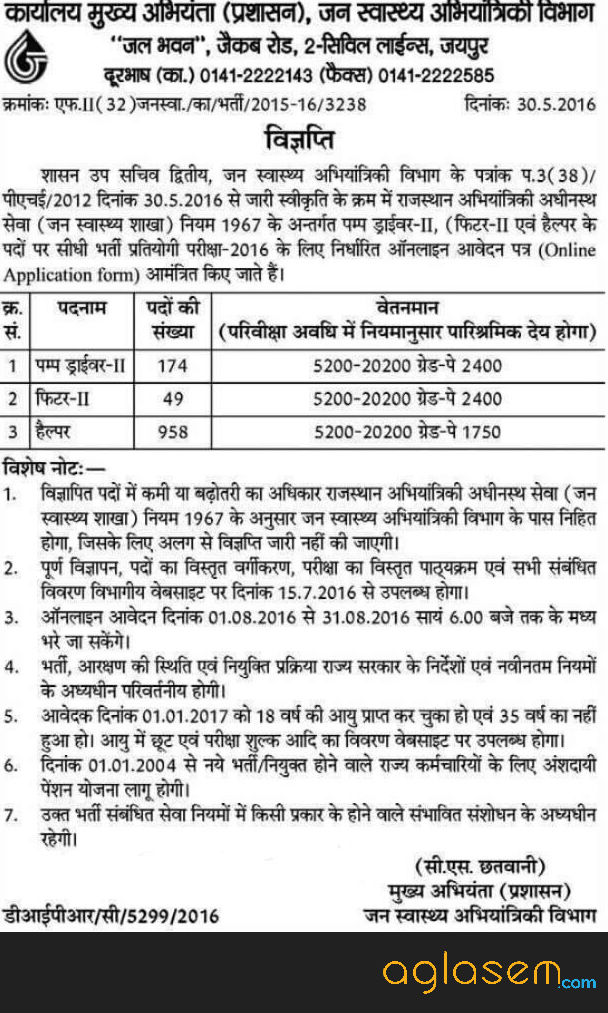 As of now, details are being accumulated, and will be updated when official advertisement is released. Till then you can go through details of last notification given below.

For advertised posts, ultimate number of vacancies will be decided by Rajasthan Public Health Engineering Department. In the event that there are to be any changes in vacancy, PHED shall decide to that.

All details such as detailed advertisement, scheme and syllabus of PHED Recruitment 2016 will be available on department website (phed.raj.nic.in or http://www.rajwater.gov.in) from 15th July 2016.

After ensuing that one is eligible, candidates can apply online from 01.08.2016 to 31.08.2016. Thus, a time period of one month will be available for completing formalities of PHED application form 2016 submission.

Selection process, reservation will be as per norms laid down by state government.

Candidates should be at least 18 years old as on 01.01.2017 and not more than 35 years. Relaxation in age limit will be made known in detailed advertisement.

All candidates who are recruited after 01.01.2004 will have relevant pension scheme available.

PHED Rajasthan Application Form 2016 – Candidates can apply online. In the first place, you should read eligibility conditions. If eligible, proceed. Keep details that have to be entered in application form of PHED Rajasthan Recruitment 2016 ready. Moreover refer to official documents while entering data in form so that you do not inadvertently enter wrong information. It is important to realize that only correct and verifiable data should be entered in application form.

PHED Rajasthan Admit Card 2016 – Usually admit card is released online. Candidates who will have applied and paid application fee in prescribed mode and as per instructions will be able to obtain admit card of PHED Recruitment 2016. For the purpose of downloading admit cards, candidates should be ready with login credentials.

It has been mentioned in the initial notification that a competitive exam will be held for Rajasthan PHED Recruitment 2016. Exact details regarding exam pattern will be made known through detailed advertisement. Exam pattern will be available on 15th July 2016.

PHED Rajasthan Result 2016 – After competitive exam for PHED Recruitment 2016 is held, the exam conducting body will evaluate answer sheets of all candidates. It is expected that an official answer key may also be published to let candidates know of the correct answers to questions asked in exam. Ordinarily, for a recruitment with so many vacancies, a few weeks time is at least taken to release results.