by AglaSem EduTech
in ALP Technician

RRB ALP Computer Based Test 2019: The Railway Recruitment Board (RRB) has declared the RRB ALP CBT 3 Result 2019 in online mode at the official website of the RRB. The students can check the score available over login for which the candidates’ need to enter the user id and password. It consists of a raw score, pro-rata score, normalized score and qualifying status of the candidate. Candidates who have passed the RRB ALP CBT 3 are now going to undergo the document verification. More information about the RRB ALP Computer Based Aptitude Test is given on this page.

Candidates as many as 8 times the vacancies for each community are called for the RRB ALP Computer Based Aptitude Test. A candidate must produce a Vision Certificate in order to be eligible for the test. Check the table below to know the important dates of the RRB ALP CBT 3.

The RRB ALP CBT 3 Result 2019 has been announced in online mode at the 21 official websites of the RRB. The candidates can check the scorecard available over login for which he or she needs to enter user id and password. In order to qualify, a candidate needs to score at least 42 marks in all of the Test Batteries. There is no relaxation of marks for any category when it comes to the Aptitude Test. The RRB ALP CBT 3 has no negative marking, unlike the two stages of CBT. It is mandatory for a candidate to qualify the Computer Based Aptitude Test in order to move further in the Selection Process.

20 May 2019 – The railway board has released a notification about the clarifications to the candidates for the RRB ALP CBT 3 which is to be held on May 21, 2019. Check the below notice.

20 May 2019 – The board has released important instructions related to the RRB ALP CBT 3 Exam which is to be held on May 21, 2019. Check the notice given below to know the instructions for the exam.

18 May 2019 – The RRB has released a notice for the candidates who have appeared for the RRB ALP CBT 3 and are have filed representation about the visibility of the responses in Test 4 and 5 can now appear for the same on May 21, 2019. To know complete details, check the notice below. 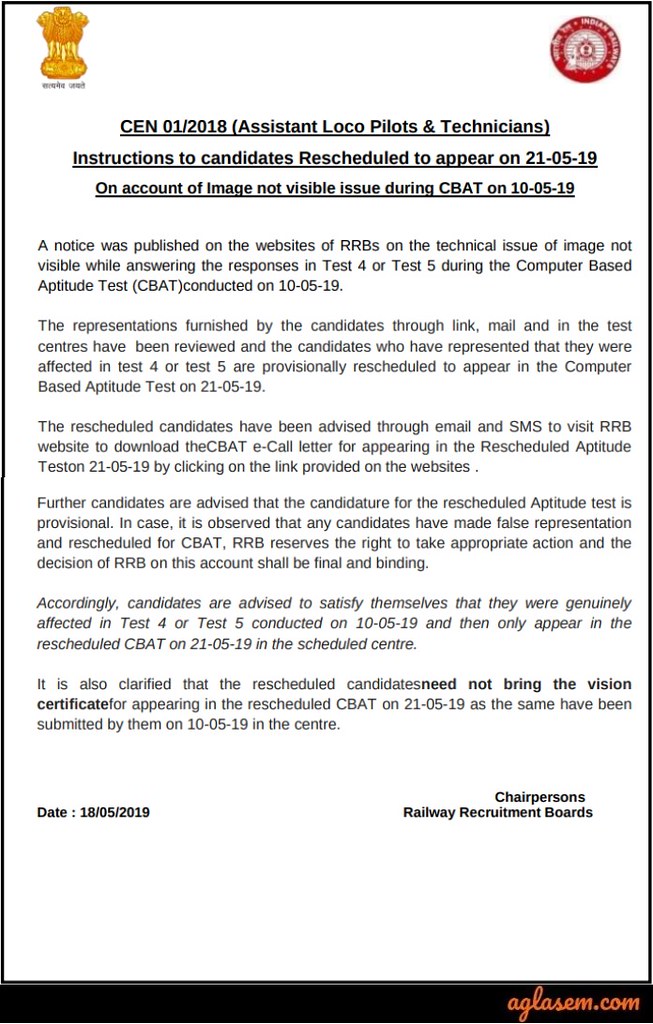 11 May 2019 – Candidates who have appeared for the ALP CBT 3 held on May 10, 2019, has filed a complaint regarding the display of the question paper in the RRB Ranchi. Check the below notice to know in detail. 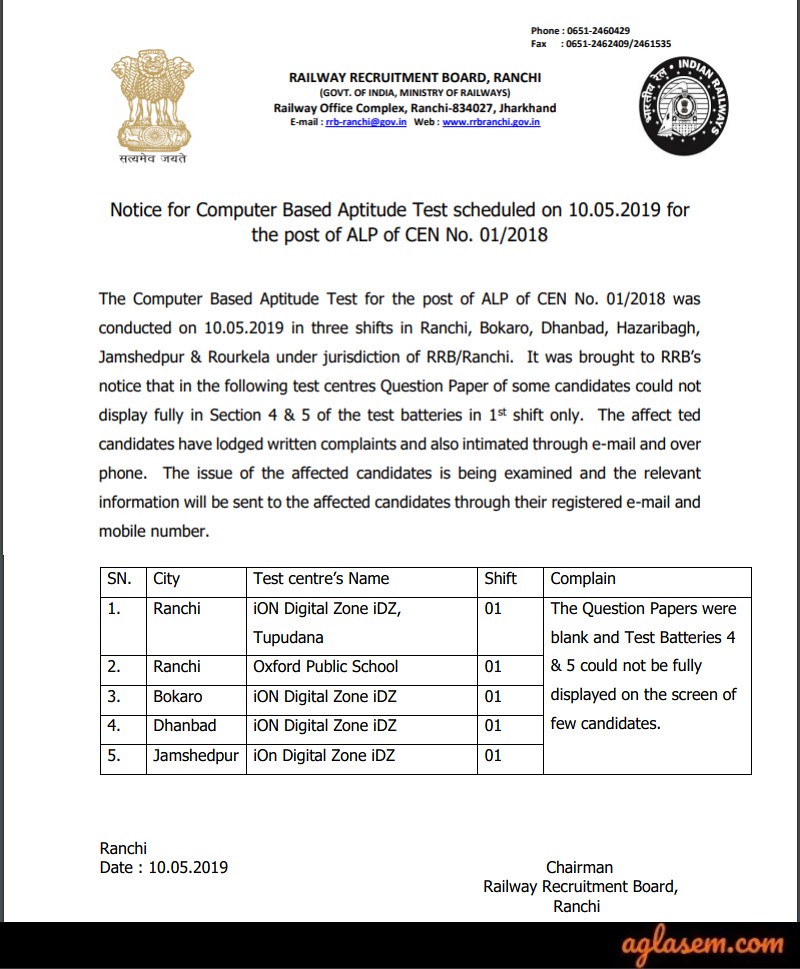 10 May 2019 – A complaint has been filed by the students that there was no display of the question paper after the completion of the RRB ALP CBT 3 at some of the exam centers in Bhopal, Indore, and Jabalpur. To know the test centers where the candidates have faced the problem, check the notice below. 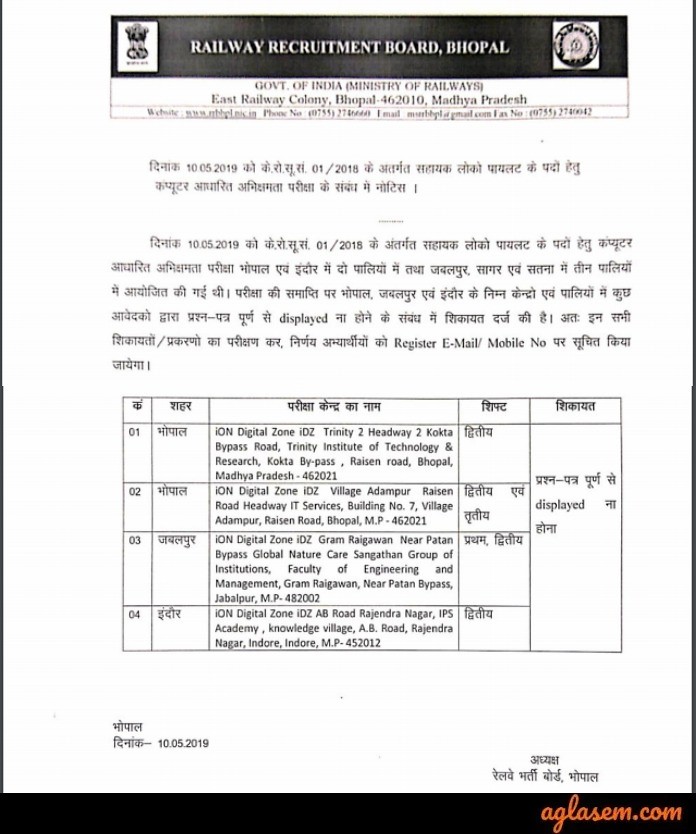 The board has released a new date for the RRB ALP CBT 3 for the Odisha candidates. The exam is now to be held on May 22, 2019. Check the notice give below to about the CBT 3 in detail. 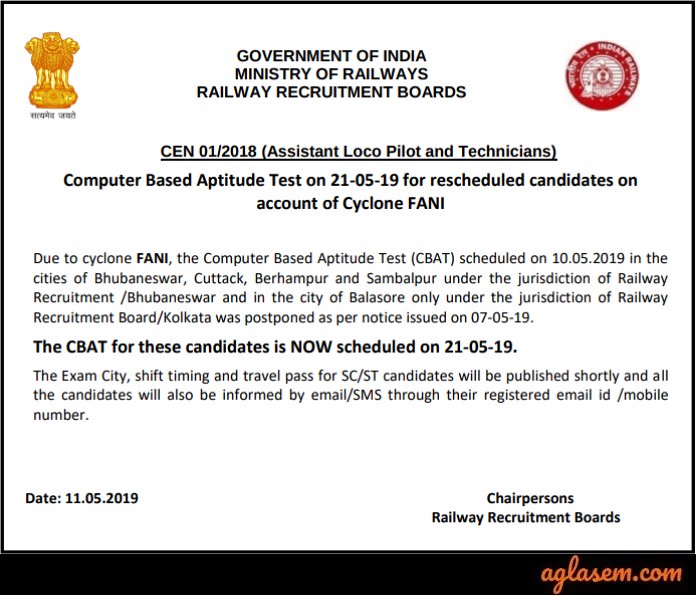 The Aptitude Test examines if a candidate has the abilities and certain traits for the post of ALP. The questions are designed as per the requirements of the job. There are five types of sections under the RRB ALP CBT 3, which are known as “Test Batteries”. A candidate is required to score at least 42 marks in each of these batteries to qualify for the next stage, i.e. the Document Verification process.

Duration of the Exam: For the CBT 3, candidates will get 71 minutes.

Here we are providing the sample questions from each subject which can be asked. Check the questions given below.

Under this test, a candidate’s memory is tested. There are questions containing locations of buildings, picture-number combination, maps, etc. A candidate must remember the patterns and answer questions accordingly. Students can check the sample questions given below.

Ques 1: Carefully go through the images given below.

Find the correct answer from the above-given examples. 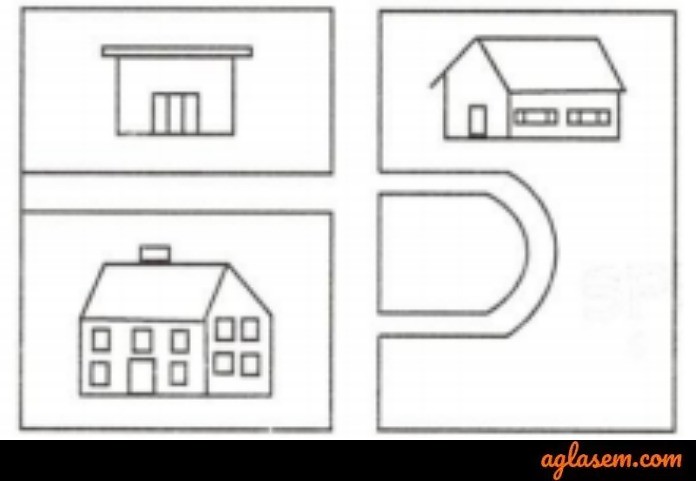 Look at the numbered houses given below and find out the letter that matches with each house located on the study map.

Ques 3: Study the map given below. 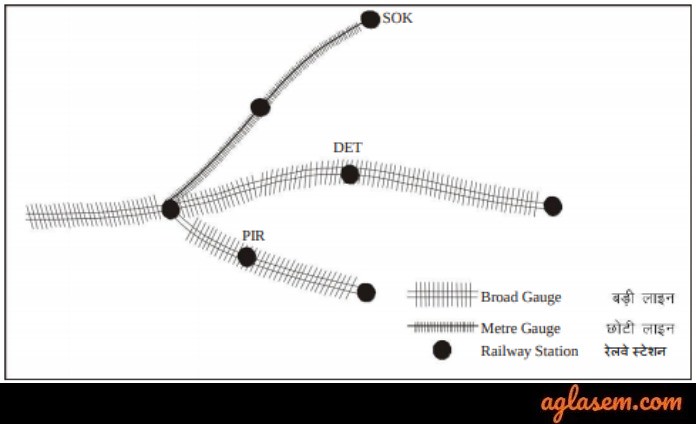 Memorize the locations. Look at the names on the left side and find the location of each station. 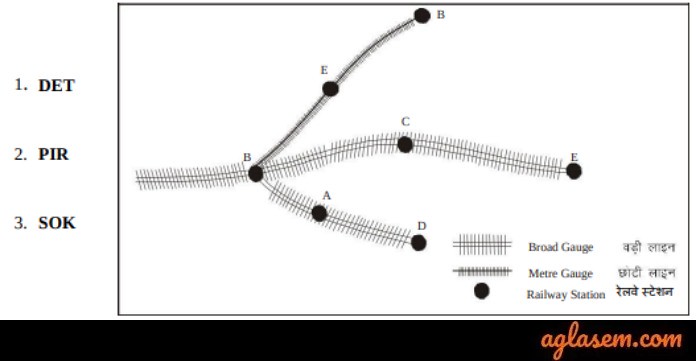 It examines a candidate’s ability to see 3D figures and determine the distance. Candidates can have a look at the sample questions given below to have an idea about the type of questions which can be asked.

Ques 1: In the image below the bricks are labeled as A, B, C, etc. Count the number of bricks which touches the pile that has a letter on it.

Ques 2: Count the number of blocks having all sides and corners hidden by the other blocks. All the blocks are of same shape and size. Students can practice the below-given questions. 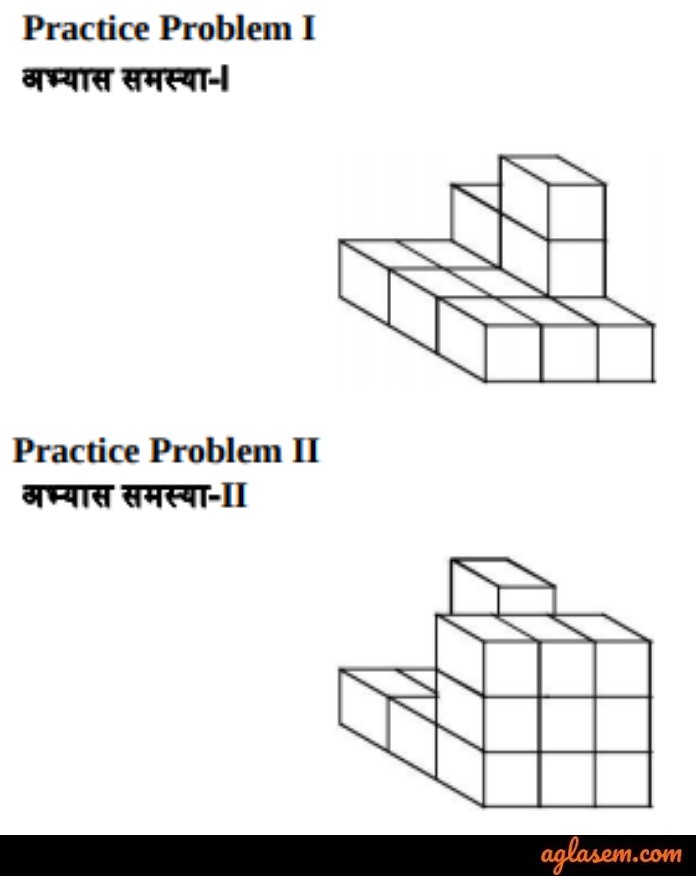 This test inspects a candidate’s concentration by giving questions related to Numerical, alphabetical and any other sort of pattern. Candidates can check the type of questions which will be asked in the power of the observation section.

Ques 1: Compare the two numbers and check whether they are same or not. If the number is the same select “Y” otherwise “N”.

Ques 2: Find the groups of the numbers which contain “6”. If “6” appears more than once then, select the answer ‘E’. 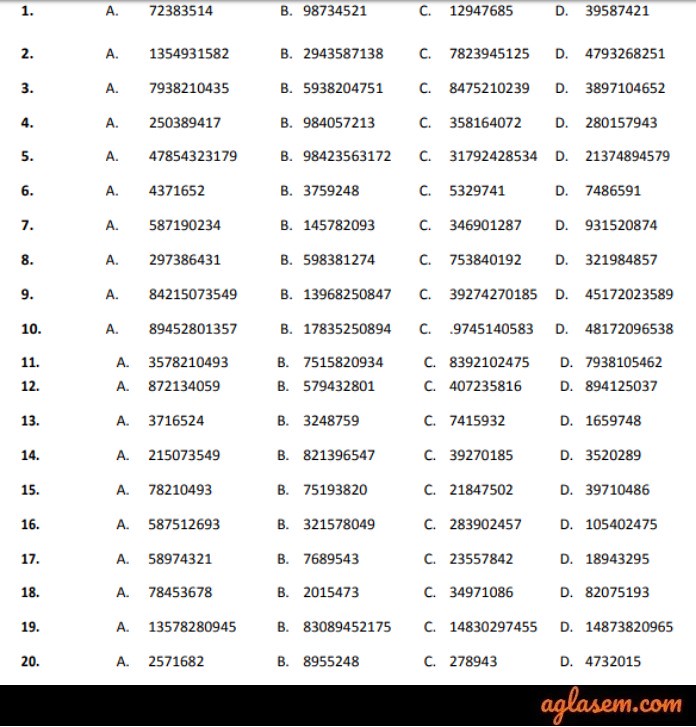 It looks into the sharpness of vision. A candidate is given images of objects and needs to rapidly discern the differences. Students can check the sample questions given below.

Ques 1: Look at the images given below and match it with the one that matches in the next row. Refer to the question below and answer it accordingly. 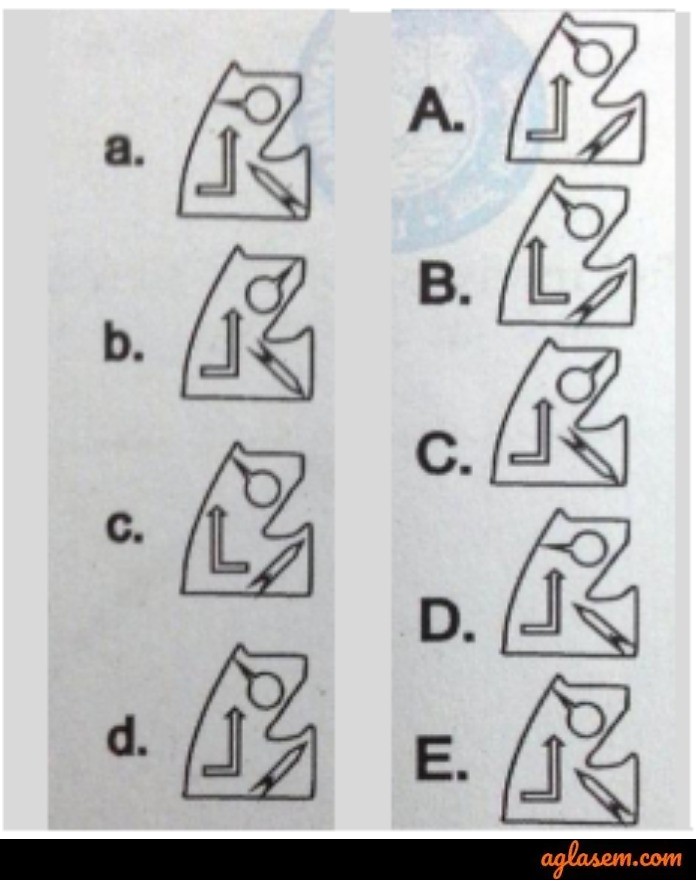 Ques 2: A figure is given on the left side for that five options are given, FInd the identical figure. 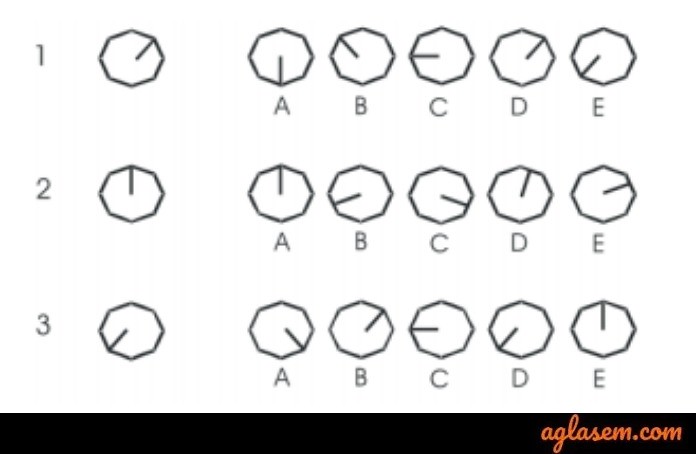 A candidate is supposed to answer questions related to the flow of direction. Here, questions in relation to the reactions in particular situations, the nature of a person, etc. are taken into account. Students can refer to the sample questions below.

Ques 1: Check the pattern of letters in the image below and answer the questions on the basis of it. 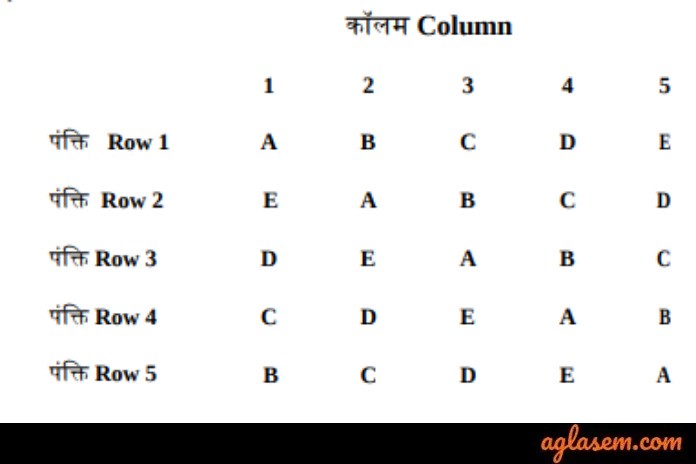 Ques 2: Based on the image given below. Candidates need to answer the questions given below. 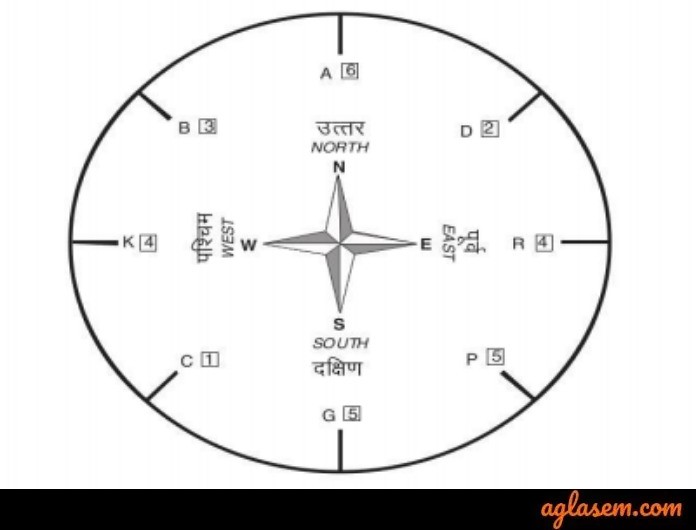 Here we are providing the pointers listed below for the candidates to know why the aptitude test is conducted by the RRB.

Candidates can check the sample paper provided by the RRB to get a fair idea about the questions which will be asked in the RRB ALP Aptitude Test.

A candidate must meet certain eligibility conditions in order to take the test and move ahead in the Selection Process. This is the eligibility criteria to appear in the Aptitude Test

Making the Shortlist
A candidate must first qualify the Second Stage of the Computer Based Test(CBT). Candidates shortlisted after CBT 2 are called for the Computer-Based Aptitude Test. The shortlist is made upon the qualification of Part B in the CBT 2. Then candidates who qualify the Part B are further shortlisted on the basis of the marks acquired in Part A of the Test.

The Final Merit List will be drawn after the conclusion of the RRB ALP Aptitude Test. Candidates will get shortlisted based upon the performance in Part A of the CBT 2 and the Aptitude Test. The final stage in the selection process for the RRB ALP comes after the Aptitude Test. Under Document Verification, all relevant documents of a candidate will be verified. It is mandatory for a candidate to appear in the Document Verification. If a candidate clears all the exams and makes the Final Merit List but still doesn’t appear in the process, then the candidature is canceled.