by Anand Meena
in ALP Technician

RRB ALP Result 2019 – Railway Recruitment Board (RRB) has released RRB ALP CBT 3 merit list and score 2019. The merit list released today, on June 06, whereas the score was announced on June 4, 2019. The result of RRB ALP CBT 3 has been declared on the zonal websites of the RRB. Candidates can check it from the link below. The aspirants of Loco Pilot and Technician will now be called for document verification. Check more details on RRB ALP Result 2019 from this page.

Latest: RRB ALP CBT 3 Result has been announced. Check it from the link below.

The result of RRB ALP CBT 3 is being released RRB wise. The candidates can check it from the link below: 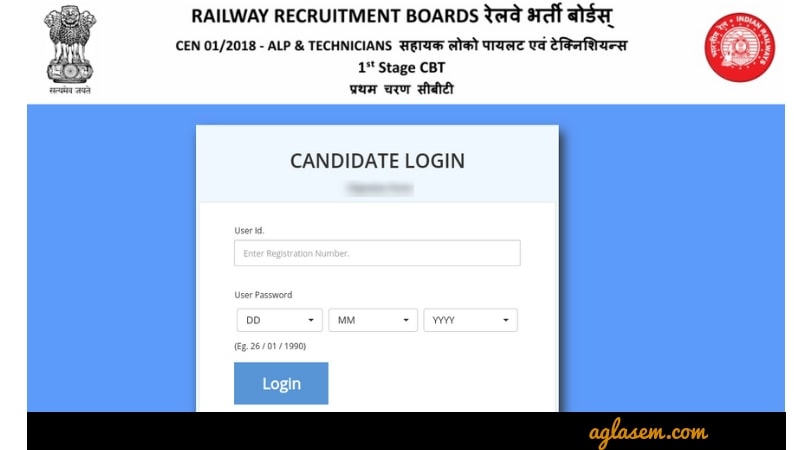 The candidates should make sure to download and save a copy of the result. Railway Recruitment Board is not going send result at the postal address of any candidates.

This examination is only be held for Loco Pilot candidates. In this round, candidates need to obtain the minimum marks in each of the test battery to qualify the RRB ALP CBT 3. The RRB ALP CBT 3 has questions only in English or Hindi language and there is no negative marking in the examination. The students need to score 42 marks in each of the test batteries to pass the computer based aptitude test. The candidates passing the CBT 3 can only undergo the document verification.

The result of RRB ALP CBT Stage 2 is announced online, on the official website of RRBs. It will be announced for ALP, as well as, Technician aspirants. The candidates will be able to check it via the link and the process above.

RRB ALP Stage 2 Pattern: The Stage 2 of ALP / Technician will be divided into two parts, A and B. Both the Parts will be compulsory but Part B will only be qualifying in nature. It means that the candidates will just have to qualify the examination but the marks of it will not be used to prepare the final merit list. The score of Part A will be used for merit preparation.

The exam pattern of RRB ALP Stage 2 (Part A) is as follows:

The exam pattern of RRB ALP Stage 2 (Part B) is as follows:

The cut off of the examination will is as follows:

Cut Off for Part A:

Cut Off for Part B:

RRB ALP Merit List 2018-19: It will be prepared on the basis of marks secured in Part A and Stage 3. The process is as follows:

If during the merit list preparation, the merit of two or more candidates appears to the same then RRB will use the following process to break the tie.

On the basis of merit, candidates will be called for Document Verification round. The documents to be carried for verification will be disclosed later on. In this round eligibility of the candidates will be checked. It is mandatory for the candidates to carry the relevant documents on the allotted date of the Document Verification. Those who will get through this round will have to appear for Medical Fitness Test. It will be conducted by Railway Administration and not RRB.

It should be noted that the user id and password to be entered in the login for RRB ALP Result should be the same as that generated during the application form filling.

The candidates can check the date for RRB ALP Result announcement 2018 from the table below.

RRB ALP Result 2018: Number of Candidates Qualified in Each Stage

Railway Recruitment Board announces RRB ALP Score and RRB ALP Result 2018 together. The details regarding these are as follows:

RRB ALP Normalized Score 2018: The raw score of the candidates are then normalized. The process of normalizing the score is very common in reference of online examinations. It is done to make sure that the level of difficulty in all the exams and session are same and that no candidates is at a disadvantage. The normalization is done as per norms.

RRB ALP Result / RRB ALP Selection List 2018: The result of RRB ALP is released as a selection list. It is a pdf file, in which the names of the qualified candidates are mentioned. The names of candidates mentioned in it can download admit card for stage 2 of RRB ALP / Technician Recruitment 2018.

The cut off of RRB ALP 2018 is of two types. First is the minimum qualifying marks, which RRB has already mentioned, and second is the cutoff for normalized marks. The candidates can check all of it from below:

RRB ALP Cut Off for Raw Score: Candidates of each category will have to secure –

RRB ALP Cut Off for Selection of Candidates: Each RRB has a separate cut off which can be seen with the results. After the exam, following expected cut offs were predicted: 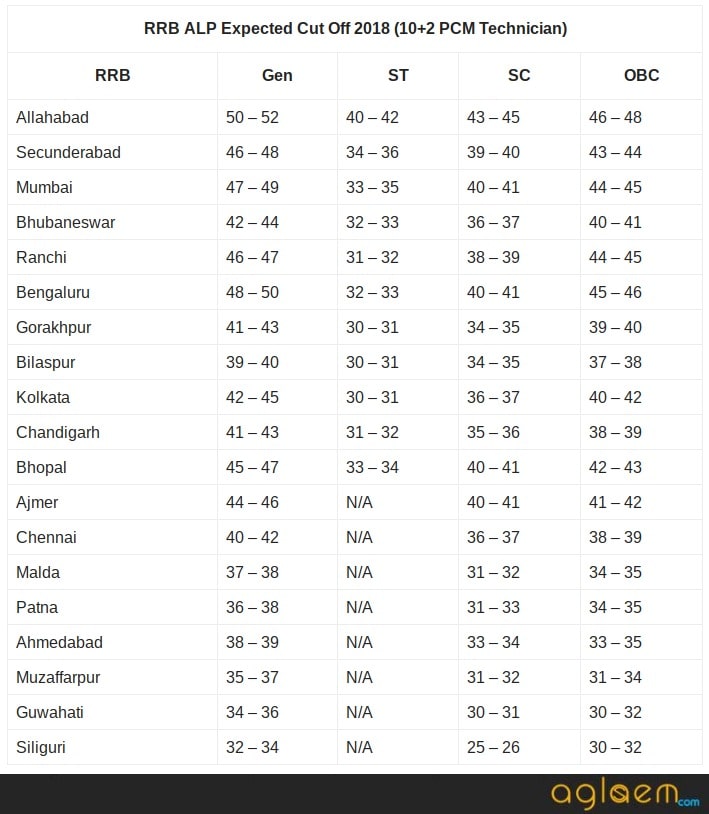