UPSC NDA 2018 – Union Public Service Commission (UPSC) has declared the final cut off marks of UPSC NDA 2018. The cut off marks are available on upsc.gov.in. This time UPSC has decided the minimum qualifying marks 25% in each subject. Earlier the final result was declared on November 26, 2018. Those who have appeared in the examinations can check the result and cut off from the result from this page. The qualified candidates will get the entry in National Defense Academy and Naval Academy.

Latest: UPSC has released the cut off marks of NDA 1 2018. Click here to check the marks of written exam and SSB.

Recently UPSC has declared the written examination result on November 26, 2018. Now it will conduct the SSB rounds of all qualified candidates. And on December 04, 2018 the cutoff marks of written exam and SSB interview for NDA I has been announced.

Let us start by checking the important dates. In the table below we have mentioned the dates for NDA 1, as well as NDA 2, but do not get confused. For now, registration is only open for NDA 1.

The National Defence Academy is an iconic institution and hallmark of global excellence in the sphere of military education. Last year, around 371 candidates cleared the written exam for NDA 1 2018. Candidates can check the schedule for NDA 2018 in the table below. 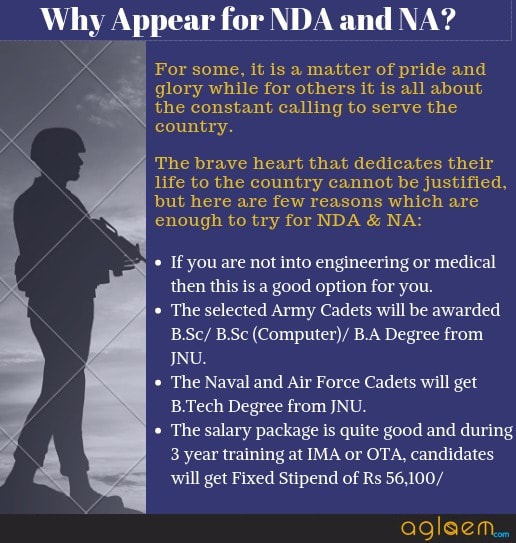 Before proceeding to apply online, ensure that you fulfill the eligibility conditions laid down by the Commission. The NDA 1 eligibility criteria are as follows:

Nationality: A candidates must be either a:

Note: In case of candidates who are Gorkha subjects of Nepal, they shall won’t have to submit a certificate of eligibility.

Note: Those who have failed INSB / PABT (Pilot Aptitude and Battery Test) shall not be eligible for Air Force.

Application Fee for NDA 01: The application fee for the exam is Rs. 100. SC/ST/Sons of JCOs, NCOs, ORs, need not pay the fee amount. The payment of fee can be paid either by depositing cash in any branch of SBI or through Visa / Master Card / Rupay Credit / Debit Card or via Net Banking of

The admit card for NDA 1 2018 will be available for download three weeks the exam form the UPSC official website. The candidate who will successfully register for the exam will be issued the admit card. No candidate will receive their UPSC NDA 2018 Admit Card/ Hall Ticket by post. The applicant will be able to download their admit card by entering the details such as Registration ID, Roll Number, Date of Birth. It is important that the applicant should carry the print out of the admit card on the day of the examination.

The UPSC NDA exam pattern is as follows:

The distribution of questions and marks in NDA 1 is as mentioned below: 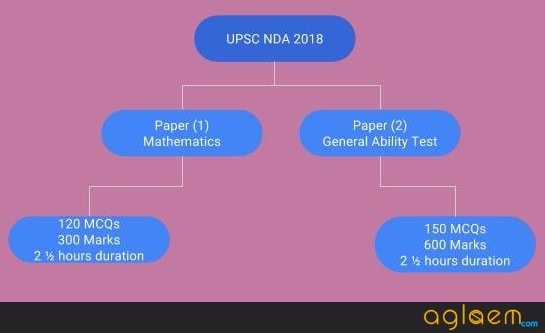 The syllabus as per previous year’s information is as follows:

Part A: English: The questions in this section will consist of Grammar and usage, vocabulary, comprehension, and cohesion in extended text to test the candidate’s proficiency in English.

This section will broadly cover subjects such as Physics, Chemistry, General Science, Social Studies, Geography, and Current Events.
For Physics

Candidate can check the given strategy to crack the entrance examination:

Balance the Preparation: With 2 and a half months left for the exam, it is necessary that the candidate should now strategize the preparation for the exam. Most of the time is recommended to you to focus on the areas in which you have the strong understanding and can easily score good marks. The distribution of questions in each section will be easy to moderate to difficult. If you have not balanced your preparation evenly, you will end up attempting the difficult question (with less probability of getting solved) than the easy ones in some other section (with more probability of getting solved). This will result in dragging your score down.

Practice Regularly: Never start a chapter or topic with the intention to just finish it. Remember this is not a school exam but an entrance examination, in which you will be competing against lakhs of the student. The objective should be to clear the concepts and gain knowledge out of it. Remember even the greatest sportsperson goes out for Net practicing before every match. Not because he/she does not know how to play against the other opponent but because the practicing makes you alert.

Study Material: It is always advised to the candidate to study from only limited resources/ guides.

Solving the Paper: Go for the questions which you find easy to solve right away. By this, you will get maximum time to focus on difficult questions. This is how you will have to manage time in the exam. Within the first 30 minutes, you should categorize the questions into the following:

The candidates need to obtain minimum qualifying marks in order to qualify the written exam. The cut off for NDA 2018 is not yet available. However, the candidate can refer to previous year data and set their goals higher than the last year.

After the declaration of the result of the written exam, the candidates will be shortlisted to appear for Interview and documents verification. At the time of Interview, the candidate needs to bring documents/ certificate in proof of Date of Birth, Academic Background, Category, etc. The qualifiers of the written exam shall have to register themselves at the Indian Army Recruiting website, joinindianarmy.nic.in within two weeks of the announcement of the result. The successful candidates would then be allotted Selection Centres and dates of SSB interview which shall also be communicated on the candidate’s registered email ID.

The UPSC will prepare a merit of the candidates who will qualify the written exam. Such candidates shall appear before a Services Selection Board (SSB) for Intelligence and Personality Test where candidates for the Army/Navy wings of the NDA and 10+2 Cadet Entry Scheme of Indian Naval Academy will be assessed on Officers Potentiality and those for the Air Force in Computerised Pilot Selection System (CPSS) and Pilot Aptitude Test and for Officers Potentiality.

Preparation of Final Merit List – The candidate will then be finally placed in a single combined list on the basis of total marks secured by them in the Written Examination and the Services Selection Board Tests. The admission to the Army, Navy, Air Force of the National Defence Academy and 10+2 Cadet Entry Scheme of Indian Naval Academy will be made up to the number of vacancies available subject to eligibility, medical fitness and merit-cum-preference of the candidates.

The most frequently asked questions have been discussed below:

Q. I will be appearing for CBSE Class 12th exam, am I eligible to apply for NDA 1?
A. Yes, the candidates who will be appearing or who have appeared of the class 12th or equivalent exam and whose result is awaited are also eligible to apply for the exam. However, the admission of such candidate will be provisional. Such candidates will have to later submit the documents in proof of qualifying the examination.

Q. Can I change my exam center for the written test or Interview?
A. The test center once allotted to the candidate will be final. The Commission or the SSB will not entertain any such requests.

Q. I have submitted the application but I just realized that I entered my category incorrect. What should I do?
A. No request for addition/alteration in the preferences already indicated by a candidate in his application will be entertained by the Commission.