by Anwesha Bose
in NDA

The Union Public Service Commission (UPSC) has announced the final result for UPSC NDA (2) 2018. The candidates can check their result at upsc.gov.in. The UPSC NDA 2 examination was conducted on September 09, 2018. The candidates have to undergo the written examination, and later, qualified ones have to attend Service Selection Board round. At last, qualified candidates will get admission to Army, Navy and Air Force wings of the NDA. Everything you want to know about UPSC NDA (2) 2018 is given here including dates, eligibility, notification, application form, admit card, result, cut off.

Latest: Marks of Recommended Candidates for NDA (2) 2018 has been announced. Know more.

Written exam of UPSC NDA (2) 2018 consists of an objective test with two subjects – Mathematics, and General Ability Test. Each subject paper is of 2.5 hours duration and have maximum marks of 900. UPSC has provided a complete syllabus of NDA exam also. Study for UPSC NDA (2) 2018 exam by studying topics given in the syllabus. Candidates who clear cut off of written exam will be allowed to appear for SSB interviews. SSB test or interview will also be of 900 marks. Final selection will be after SSB interviews.

Admission to NDA and NA will be on basis of written exam result followed by intelligence and personality test held by Services Selection Board. Certificates related to eligibility have to be submitted after the declaration of NDA 2 Result. UPSC has announced the NDA (2) 2018 result of written examination after the successful completion of it. The Qualified candidates will be moved forward to attend SSB interviews and tests, details of which will be e-mailed to them.

The Union Public Service Commission will decide the cut off for the written exam. NDA 2 Cut Off 2018 will be the minimum qualifying marks. UPSC arranges candidates with marks more than or equal to qualifying cut off, in order of marks obtained to arrive at merit list. Such candidates will be declared to be qualified in NDA 2 Result 2018.

Candidates will appear before Services Selection Board.

For Army and Navy wings of NDA and 10+2 Cadet Entry Scheme of Indian Naval Academy, SSB will assess on Officers Potentiality. Those for Air Force will be assessed in Computerised Pilot Selection System (CPSS) and Pilot Aptitude Test (which forms the whole PAB Test) and for Officers Potentiality. PABT applicable to candidates with Air Force as the First choice would also be conducted for all SSB qualified candidates with one of the choices as Air Force subject to their eligibility and if they are so willing.

UPSC publishes cut off marks or qualifying marks after the declaration of result. Here are past year cut offs of NDA exam. 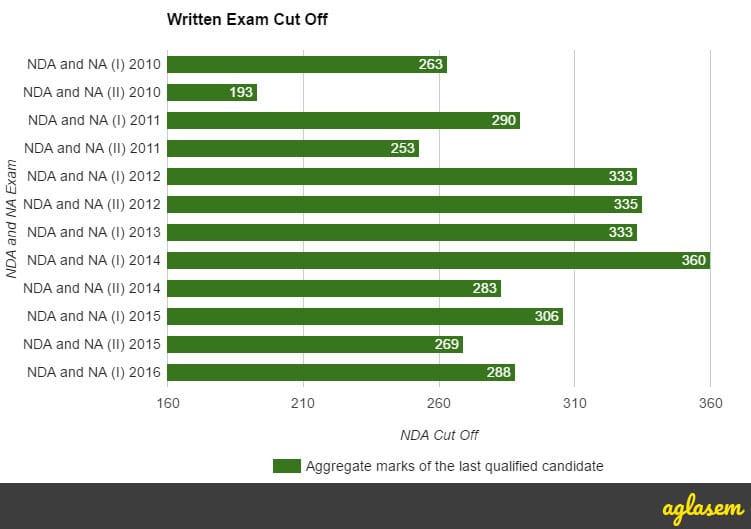 Applicants has been issued admit card by UPSC after the successful completion of the application form. NDA admit card 2018 can be downloaded from upsc.gov.in. RID and date of birth or password are required to download it.

For the sake of the candidate the vacancy details for UPSC NDA (2) 2018 is given below.

Gender
Only male candidates can appear in NDA exam.

Marital status
Candidates needs to undertake not to marry until they complete their full training.

Physical standards
UPSC prescribes physical and mental fitness. A guide for fitness required for NDA and NA admission 2018-19 is given notification. Read it and make sure you are fit. Most common issues found due to which candidates get rejected are these.

Permanent body tattoo is only permitted on inner face of the forearm. Army, Navy, Air Force may permit tribes with tattoo marks on face or body as per existing custom and traditions on a case to case basis.

The candidates were required to pay a fee of Rs. 100/- (Rupees one hundred only) [except SC/ST candidates were exempted from payment of fee] either by depositing the money in any branch of SBI by cash or by using net banking facility of State Bank of India or by using any Visa/MasterCard/Rupay Credit/Debit Card

UPSC NDA (2) 2018 written examination will have objective type questions only. Mathematics and General Ability Test Part B (GK) will be bilingually set.

SSB selection will be a two-stage selection process – Stage I and Stage II. Only such candidates who will clear stage I can only be able to appear in stage II, else they will be sent back.