by Anand Meena
in SSC

SSC CGL Cut Off -The Cutoff of the SSC CGL Exam is hosted on this page year-wise. SSC CGL cutoff is the minimum score that must be secured in the exam in order to qualify and get included in the merit list. The cutoff is released to shortlist the number of candidates for the next level of recruitment. Cut off of SSC CGL is released with the result declaration and is decided to keep a number of factors in mind. Find all the relevant details on the same in the following sections. The Cutoff of the SSC CGL exam is released as a different score for the candidates of different categories so as to accommodate the reservation criteria in allotments.

The cutoff is decided on a lot of factors which are enlisted in the following section: 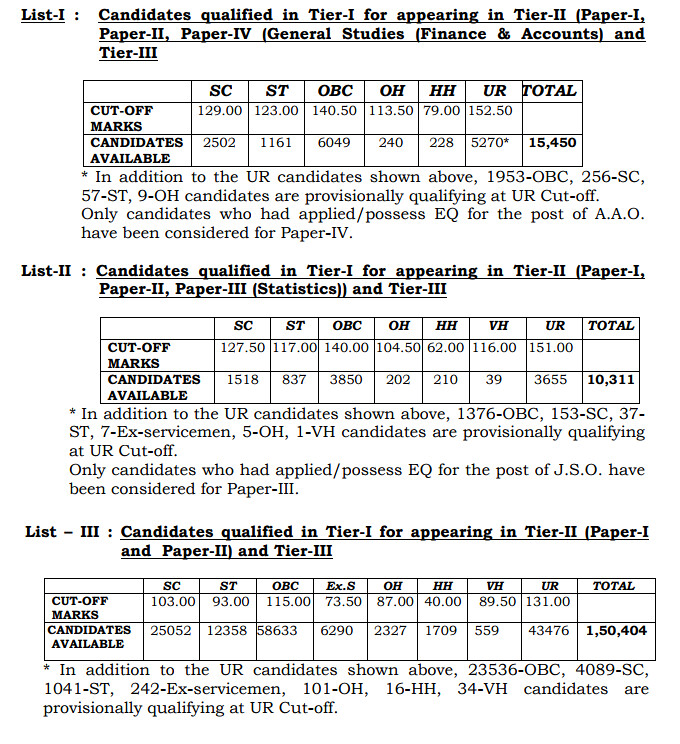 On the basis of CGL (Tier I) Examination, 2016, number of candidates provisionally qualified for different papers of Tier-II are:-
Paper-I and II : 1,49,319 (Total candidates)
Paper-III: 28,234 (Only for posts of Junior Statistical Officer (Grade-II)/Compiler)
Paper-IV: 45,293 (Only for the posts of Assistant Audit Officer in CAG) 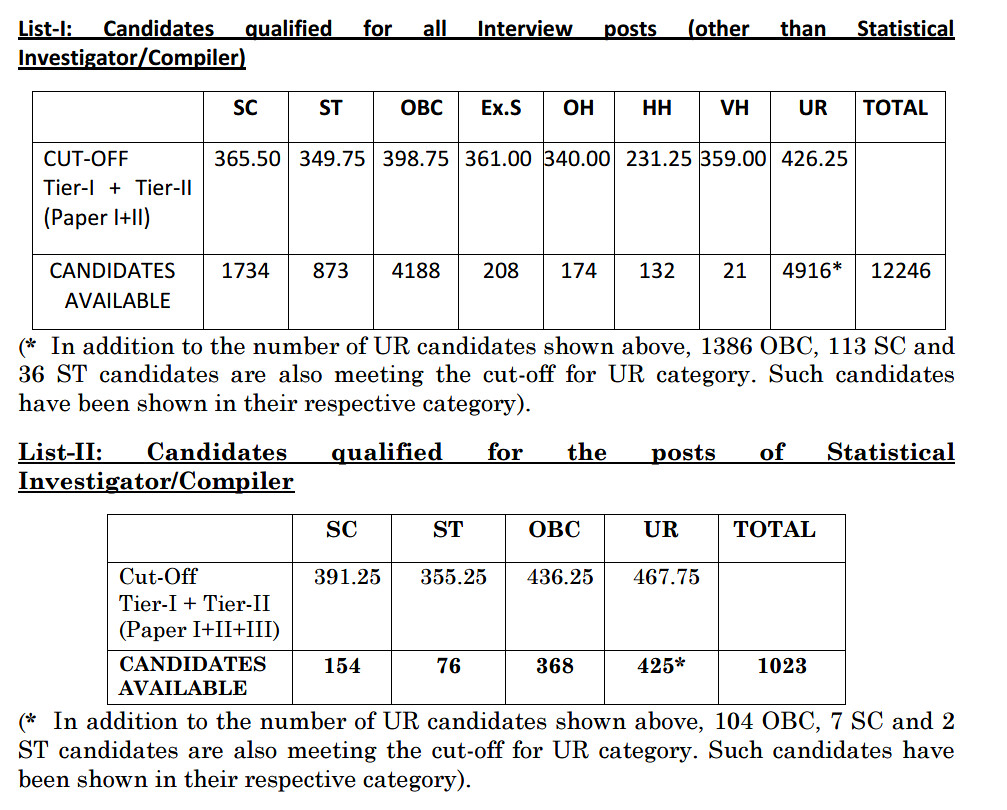 Combined Graduate Level (Tier-I) Examination, 2014 was held on 19th, 26th October, and 16th November 2014 at various centers all over the country. Re-examination at some centers was held on 18th January 2015 at Jaipur. A total of 13,01, 391 candidates appeared in this examination.
Category-wise details of candidates who have qualified for Tier-II and cut-off applied are as under:
Candidates qualified in Tier-I for appearing in Tier-II

* In addition to the number of UR candidates shown above, 24347 OBC, 5643 SC and 1583 ST candidate are also meeting the cut-off for UR category. Such candidates have been shown in their respective category.
Result has a column indicating ‘YES’ in the case of candidates qualifying for Paper-III as per their option / if preference is Blank.
Note: Category/ post preference have been taken from unverified data sent by Regional
offices.
Category-wise breakup of candidates qualifying for Tier-II and who have also opted for Statistical Investigator/Compiler or who have left their Preference Blank are :-

All these candidates will be called by Regional Offices to appear for Paper-III also alongwith Paper-I+II. Paper-III is mandatory for selection to the post of Statistical Investigator/Compiler.
On the basis of CGL(Tier-I) Exam – 2014, number of candidates provisionally qualifying for different papers of Tier-II are :-
Paper-I and II only : 1,42,642 (Total candidates)
Paper-III additionally: 77,577 (Number of Candidates who have opted for Statistical
Investigator/Compiler or have left the Post Preference ‘Blank’)
SSC CGL