RRB ALP Answer Key 2019 – Railway Recruitment Board (RRB) is releasing the Final answer key for RRB ALP CBT 2 2019. The RRB ALP Final Answer Key for Stage 2 CBT can be downloaded from this page. To access the login and download the answer key, user id and date of birth are required. The final answer key has been prepared on the basis of the objection submitted by the candidate. Questions, answer marked in the exam, with correct is given in the RRB ALP CBT 2 Answer Key. Check details on RRB ALP Answer Key 2019 from the page below.

Latest: RRB ALP CBT 2 Final Answer Key will be released today at 6:30 PM. Download it from the link below.

RRB ALP selection process involves two stages of CBT, an Aptitude Test, and Document Verification. The final Merit List takes into account 70% of Part A CBT 2 marks and 30% of the RRB ALP Computer Based Aptitude Test marks for Loco Pilot. However, for recruiting Technician on the marks in CBT 1 and 2 will be considered. Use the table below to know all the important dates of RRB ALP Answer Key 2018-19 for CBT 2.

The Railway Recruitment Board (RRB) has extended the date to raise objections for RRB ALP CBT Stage 2 answer key. Candidates can now raise the objection till February 21, 2019, up to 23:59 Hrs. Check the official notice given below: 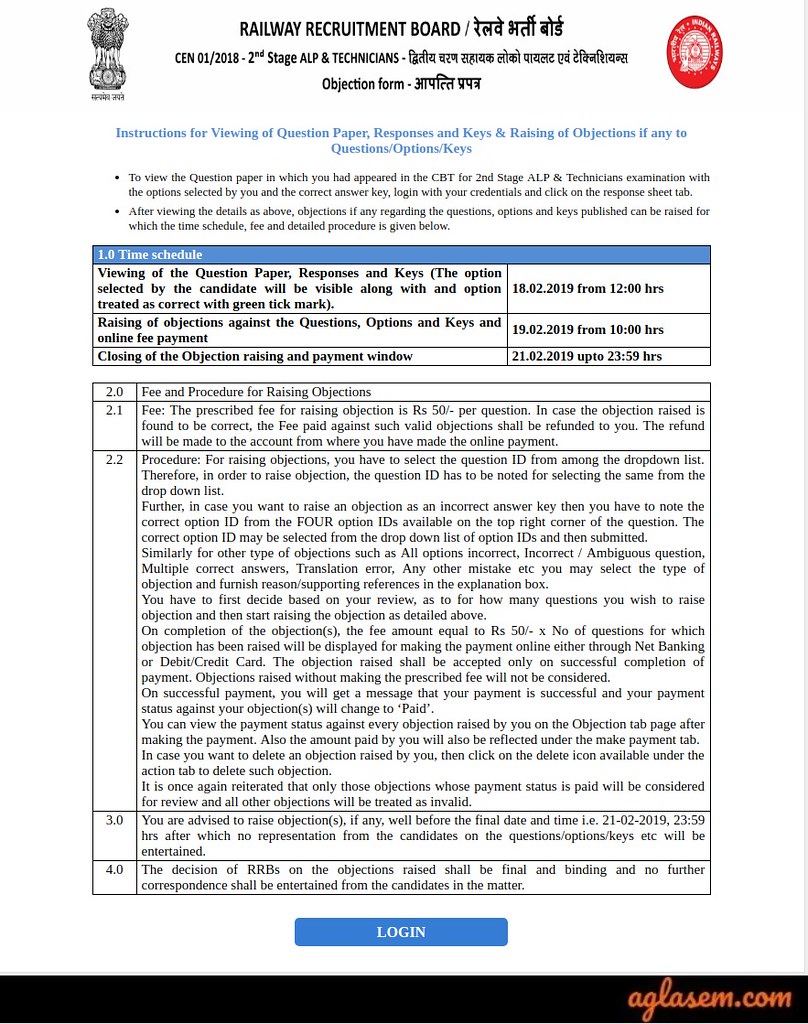 When the marking will be done, candidates will get their estimated RRB ALP CBT 2 result. 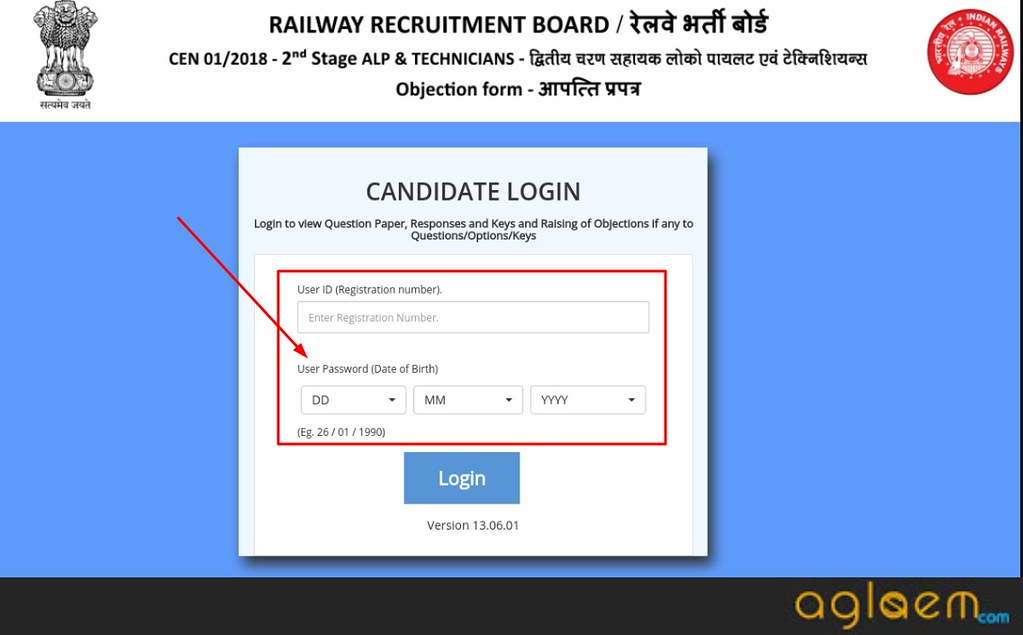 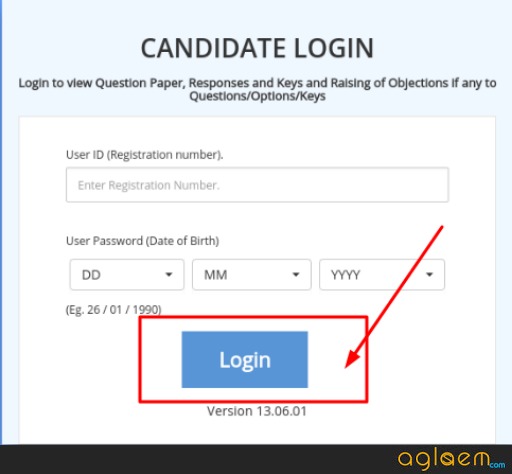 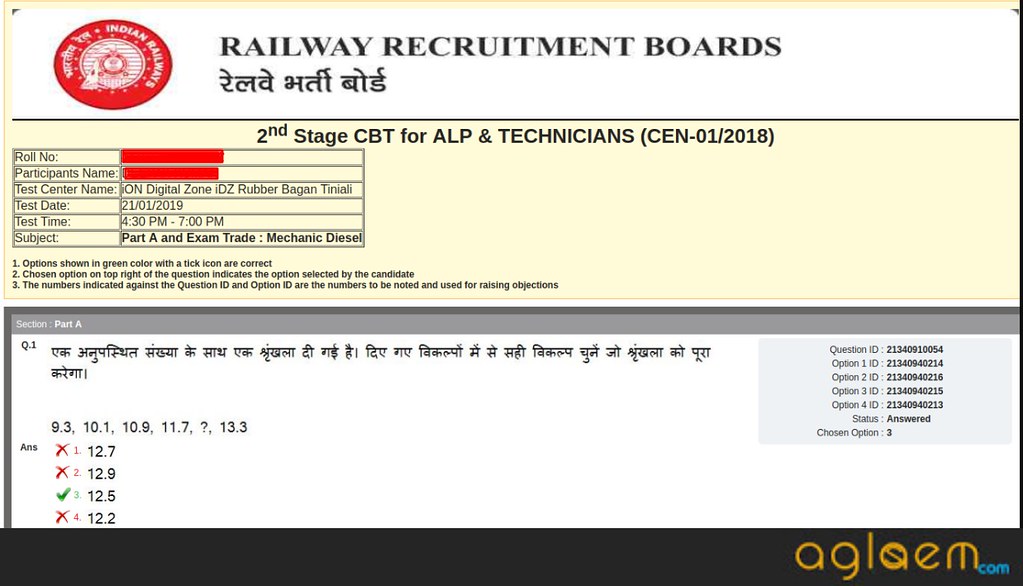 To raise objects against RRB ALP Answer Key 2018 and RRB ALP Question Paper 2018, the candidates need to follow the steps below:

Note: The objection will only be considered if the candidates have paid the prescribed fee.

RRB will analyze all the objections which candidate have submitted against the provisional answer key. Once, the objections are scrutinized, the RRB will update the provisional answer key and make changes in it. Then, it will release the final answer key of RRB ALP 2018-2019 for CBT 2. The RRB ALP Final Answer Key 2018-19 for CBT 2 is important. The result of the examination will be prepared on the basis of it only. Candidates will be able to check it soon.

The official RRB ALP Answer Key 2018 will be available on the official website of RRB, which are:

About CBT and AT

First Stage CBT (Common for ALP/Technician): The first stage of CBT was of objective type. There will be 75 questions of Mathematics, General Intelligence and Reasoning, General Science and General awareness on current affairs. The total time will be given for 1 hour.

Computer-Based Aptitude Test (AT): The candidates who have applied for ALP and will be shortlisted by the second stage of CBT, they will get the chance to appear for aptitude test. The candidate will have to secure a minimum score of 42 marks in each of the test batteries to qualify.

After too many misleading dates, we finally now know that RRB ALP Answer Key 2019 will be available on February 18, 2019. Check the official notification below:

Candidates can check RRB ALP CBT 1 Answer Key from the link below:

If you have any doubts regarding RRB ALP Answer Key 2018 then comment below.RRB ALP 2018