RRB ALP Cut Off 2018-2019 – Railway Recruitment Board (RRB) uses ALP / Technician Cut Off to check the qualifying status of the candidate. To be eligible for the Computer-Based Aptitude Test followed by the DV round, candidates have to obtain the cut off marks. The RRB ALP 2018-2019 Cut off is available through pdf and is released separately for General, PwD, and ExSM. The selection of the candidates is done on the basis of minimum qualifying marks and cut off for normalized marks. The Minimum qualifying marks for CBT 2 is 40% for UR candidates and 30% for SC and OBC candidates. ST candidates need to score 25% marks. The RRB ALP 2018-2019 Cut Off for normalized marks is announced with the result. Check details about RRB ALP Cut Off 2018-2019 from this page.

Latest: RRB ALP CBT 3 score and merit list have been released. However, no cut off has been provided so far. As soon as it will be released, we will update it on this page.

The cut off for all RRB ALP CBT 2 is as follows:

For second stage, the selection of the candidates will be done on the basis of normalized marks in 1st Stage CBT. The candidates who will appear for the 2nd stage, will have to score above the following RRB Loco Pilot Cut Off range:

RRB ALP Cut Off for Part A

RRB ALP Cut Off for Part B

Selection for Stage 3 As Per RRB ALP Cut Off: On the basis of cut off, candidates will be selected 8 times the number of vacancies for Stage 2

This CBT is only for those candidates who aim to be recruited as Loco Pilots. The RRB ALP Cut Off for this section will be as follows:

Last time, the ALP and Technician examination was held in 2014. The RRBs separately announce the final cutoff of RRB ALP and Technician. The RRB ALP Final Cut Off is that which is announced after the document verification round.

The candidates can check final RRB ALP Previous Year Cut Off from below:

The marks vs. cutoff category and community is as follows: 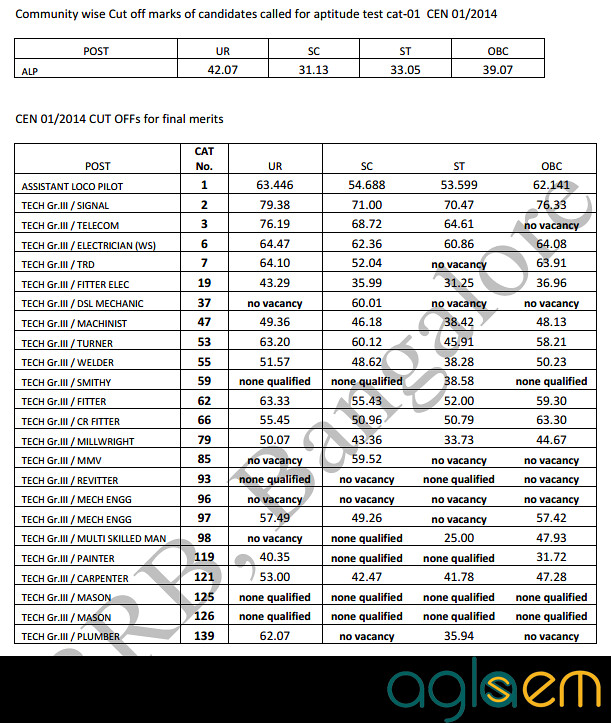 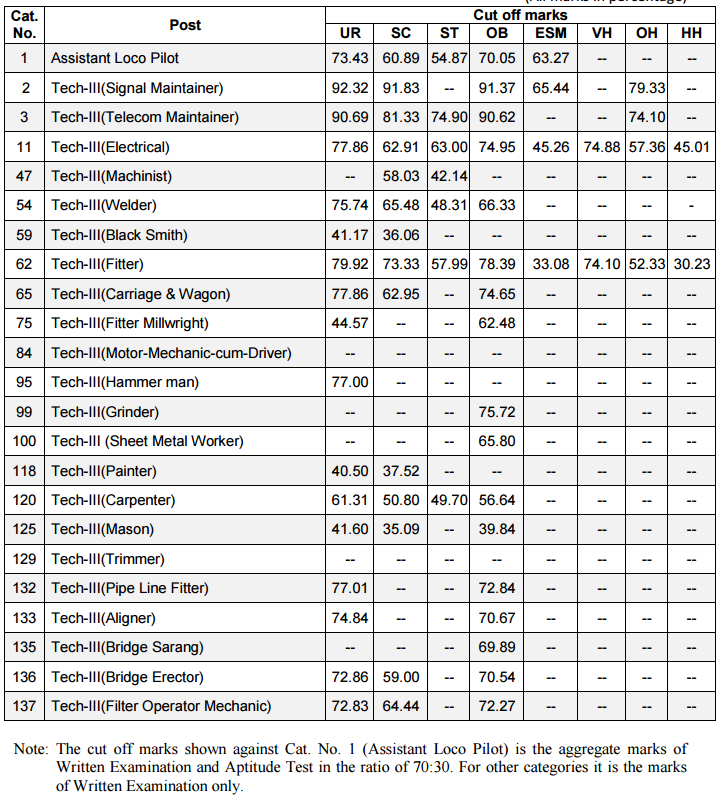 The result of RRB ALP will be announced separately for all the CBTs. The important points that candidates need to know about RRB ALP Result 2018 are as follows:

The below given is the old RRB ALP Cut Off. As soon as the revised cutoff will be announced, we will update it on this page.

Candidates can check the expected RRB ALP Cut Off 2018 from the link below:

In order to qualify computer based test, the candidates will have to score as per the cutoff percentage for each category. Aspirants can check the cutoff for RRB ALP CBT from below:

The RRB ALP Expected Cut Off 2018 is as follows:

*This is in that case in where marks per question is one.

Note: 2% relaxation on the above stated cut off will be given to PwD candidates. However, it will only be given if there is shortage of PwD candidates against vacancies.

Selection for Stage 2 As Per RRB ALP Cut Off: On the basis of cut off, candidates will be selected 15 times the number of vacancies for Stage 2