by AglaSem EduTech
in Intelligence Bureau

MHA IB ACIO Result 2017 has been announced for Tier 1 and Tier 2. As per result of IB ACIO 2017 Tier 1, candidates were called for Tier 2 exam. Then there was shortlisting for interview on basis of combined performance in Tier 1 and 2. Finally, overall performance in Tier 1, 2, interview determines selection to post of Assistant Central Intelligence Officer Grade II / Executive. Intelligence Bureau, Ministry of Home Affairs conducted ACIO recruitment tier 1 exam on October 15, 2017. And Tier 2 on February 25, 2018. Now the Final result of IB ACIO has been announced. Get here complete details of MHA IB ACIO Result 2017 such as date, cut off, how to check result. There are separate cut-offs for Tier I and Tier II. Candidate must clear both to reach interview process of ACIO selection in MHA IB.

Details of MHA IB ACIO Grade II Result 2017 for Tier 1, 2, 3 are given separately for each tier on this page. Check below.

IB ACIO 2017 Result of Interview / Final Result: Interview is of 100 marks. Candidates also have to present documents during it. You get marks in interview out of 100. Then total marks of Tier 1, 2, 3 determine final result of MHA IB ACIO 2017.

IB ACIO 2017 Result of Tier 2: Tier 2 held on February 25, 2018. Qualifiers from Tier 1 appeared in it. It is a descriptive test with 30 marks essay, and 20 marks English comprehension and precis writing. Now Tier 1, as well as Tier 2 performance, determine whether you qualify for the interview or not.

IB ACIO 2017 Result of Tier 1: Candidates have appeared in a written exam termed as MHA IB ACIO 2017 Tier 1, on October 15, 2017. The paper contained 25 questions each on (i) general awareness, (ii) quantitative aptitude (iii) logical / analytical ability (iv) english language. You get marks depending upon number of correct and incorrect answers. MHA fixes a cut off for IB ACIO 2017 Tier 1. If your score is at par or above it, then you qualify for Tier 2 as per result of MHA IB ACIO 2017 Tier 1. 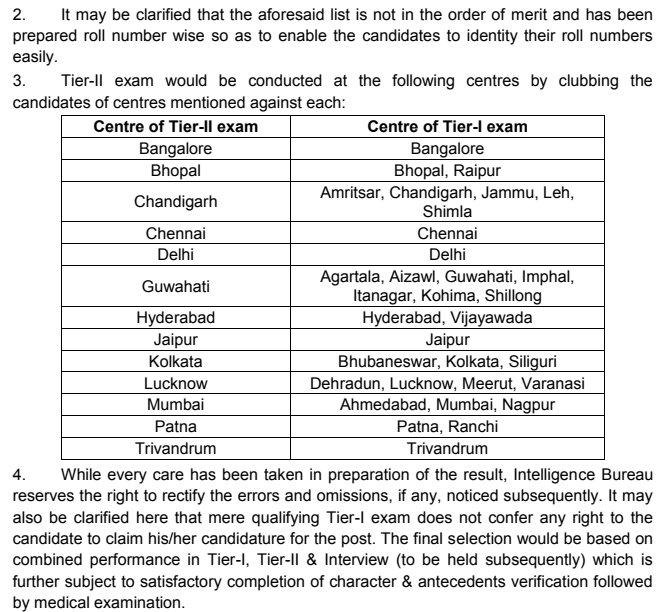 Result has come in the form of a PDF file containing roll numbers of qualified candidates. It has not been provided through login. Since it is the former, so all you need to do to check result is to search for your roll number in the file. If marks are later revealed through the latter then you will have to log in with login credentials to check result.

Result of MHA IB ACIO 2017 of Tier 1 has been declared by Ministry of Home Affairs, Intelligence Bureau, at www.recruitmentonline.in/mha11/.

The cut off for Tier II is 33%. Therefore you must score at least 33% to qualify.

If you have qualified Tier 1, then first of all heartiest congratulations. You have indeed cleared one of the toughest exams in India. You are one step closer to getting the prestigious position of ACIO in Intelligence Bureau. The next step is to prepare for Tier 2.

Tier 2 shall be a descriptive test. Its exam pattern is as follows. 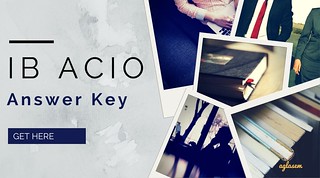 Check correct answers of questions asked in Tier 1 exam for Assistant Central Intelligence Officer recruitment 2017. Answer key contains answers of all 100 questions. Until MHA IB ACIO Result 2017 of Tier 1 is announced, answer key is useful to estimate score. Calculate marks like this: You get 1 mark for correct answer, and 1/4 mark is deducted for wrong answer.

The tier 2 exam is descriptive type. It involves essay writing on one of the given topics for 30 marks and English comprehension, précis writing for 20 marks. So the max score in it is 50 marks.

Shortlisting of candidates for final selection is subject to successful completion of their character and antecedent verification.

Amongst the examinees, the individuals scoring the minimum qualifying marks in the IB ACIO Exam 2017 will get intimation through email for appointment. After completing all the formalities in the selection criteria, the individuals get appointment letter of joining for the post of Assistant Central Intelligence Officer Grade II/ Executive. All the test takers must know the procedure of selection, the method to view the result of IB MHA ACIO 2017 and other related details.

You can look at the table below to fetch the details regarding the Result of IB MHA ACIO 2017.

Method to Check the Result of IB ACIO Grade 2 2017

Since the Ministry of Home Affairs releases recruitment results online, hence it is easy for applicants to access result from any place. Kindly follow the procedure given below to obtain the IB MHA ACIO Result.

Step 1. IB MHA ACIO Result Login Link. On this page, one can navigate the direct link to open the Login window.

Step 2. PDF file of Result: Once you click the link, the merit list will display on the screen in the pdf format.

Step 3. View & Save the Result: Look for your Name and Registration Number in the merit list and if you find it, then, you will be invited for further appointment.