by AglaSem EduTech
in Intelligence Bureau

The Intelligence Bureau (IB) under the Ministry of Human Affairs, Government of India, is recruiting 1,430 suitable candidates for the posted of ACIO II Exe (Assistant Central Intelligence Officer Grade-II). Candidates between 18-27 years who have done their graduation and possess knowledge of computer are eligible for the IB ACIO 2017 Recruitment. The exam takes place in 2 tiers. Tier I is of 100 marks and conducted on October 15, 2017. The Tier-II is of 50 marks and Tier-II conducted on February 25, 2018.

The candidates who are successful in obtaining 33% marks in Tier-II are called to attend the Interview round. Interview round has 100 marks.  In total, the candidates will be awarded marks out of 250. Those who complete the formalities like document verification etc. will be allotted a post. The online registration for the exam has ended and now the admit card is available for the registered candidates. Check more details below.

The candidates will have to appear for Tier I at one of the test centres mentioned. There will be negative marking of ¼ for each incorrect answer marked by the candidate. No marks will be given or awarded for answers that have not been attempted by the candidates. Only those candidates would be called for Tier-II exam who come up to a certain standard in Tier-I. There will be minimum cut off marks of 33% in Tier-II. The date and time and centre of Tier-II would be informed to the successful candidates through the application portal as well as through E-Mail

Based on the combined performance in Tier-I and Tier-II candidates would be called for Interview. Interview session has 100 marks allotted to it. The date and time and centre would be informed to them through the application portal and E-mail. Tier-II exam and Interview would be conducted at a centre by clubbing the candidates of nearby centres.

Based on the combined performance, the candidates would be shortlisted for final selection which will be subject to successful completion of their character and Document verification followed by a medical examination.

The candidates are advised in their own interest to go through the detailed advertisement available on the website of MHA to ensure that they fulfill the eligibility conditions and other requirements before filling up the form in online mode. Intelligence Bureau, The Ministry of Home Affairs will not be held responsible for any kind of confusion.

The applications should be submitted online through the official website at mha.nic.in

The examination fees can be paid offline ( cash deposit) or online (INternet Banking). ATM-Cum-Debit Card and Credit Card of State Bank of India or any other bank can pay the fees through SBI Collect option.

The candidates has to opt for one of the centre from the 33 centres given in the table below where they want to appear for the examination. The option once exercised will not be altered.

The job of an Assistant Central Intelligence Officer in Intelligence Bureau is of sensitive nature. Hence it is not directly allowed / suggested for any current employees to divulge information on the job profile. Some reviews are available online from anonymous personnels, albeit very old and may not be applicable any longer. Such candidates are adviced to apply for IB ACIO Grade 2 2017 who wish to work in Intelligence Bureau.

Regarding pay scale, the following information is given in 7th Pay Commission report. 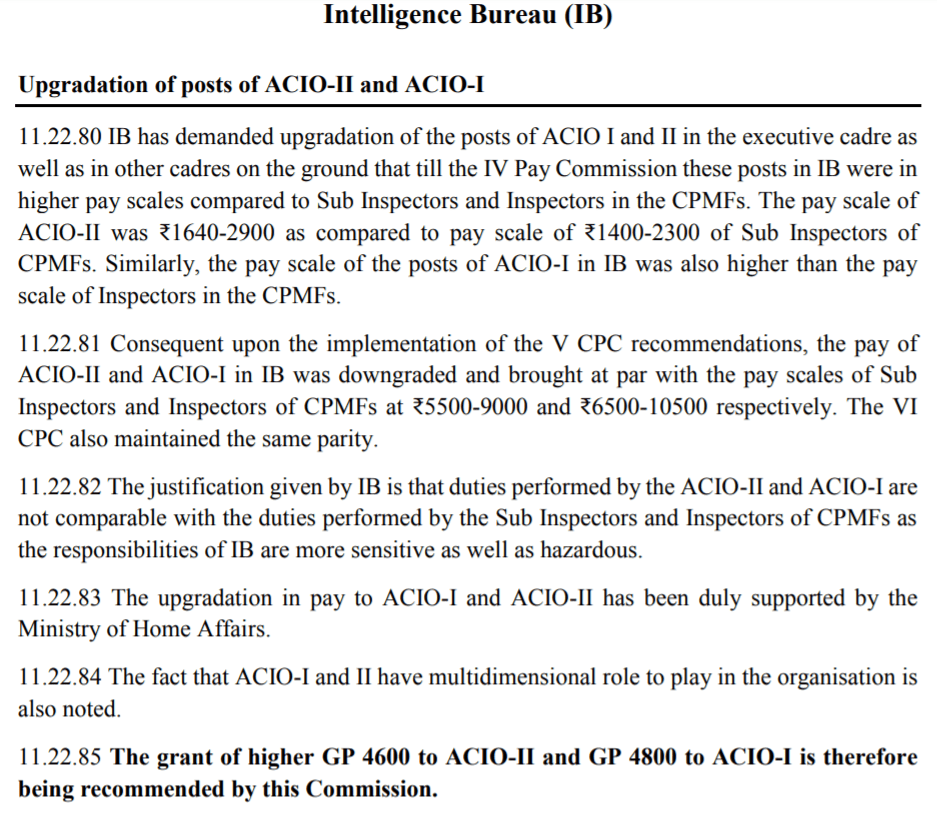