Latest: The application process of Indian Army TGC 129 has begun from October 30, 2018. Scroll down to check more information.

After final selection, Indian Army provides the one-year training to the candidates. After successful completion of training, the candidates will be provided the post of Lieutenant. Then year by year after promotion they will get the rank of Captain, Major, Lt. Colonel, Colonel (TS) etc. 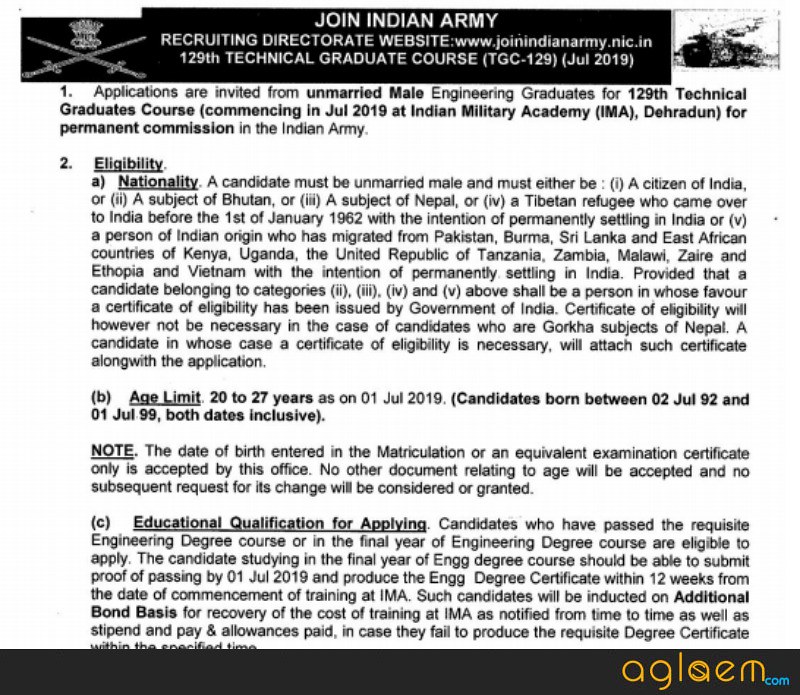 Streams of Engineering Which Are Eligible For TGC 129

Generally, Indian Army recruits the candidates who have engineering Degree in any of the following streams.

Like the last time, the same number of vacancies are announced. The candidates who are going to participate in the recruitment process can look into the vacancy distribution.

Only unmarried males are eligible for the course

Or a candidate must be a subject of  Nepal, Bhutan, Pakistan, Burma, Sri Lanka, East Africa, Kenya, Uganda, United Republic of Tanzania, Tibetian refugee with the intention to permanently settle in India and must possess the certificate of eligibility, issued by the Government of India may also apply.

Age Limit: The candidates who fall under the age bar of 20 to 27 are eligible to apply.

Education Qualification: The candidate must have an engineering degree in any discipline mentioned above.

After conduction of interview, Indian Army will declare the names of the candidates on its official website. The candidates will then able to directly access the result.

SSB interview round is a five-day long process. The candidates who will clear the interview, Indian Army will select them in the Technical Graduate Course. Indian Army will release Combined Merit List, The merit list will be prepared according to the Graduation marks and marks obtained in SSB.

In the last batch recruitment of Indian Army TGC, the cutoff marks of graduation on which the selection of candidates was done for the SSB interview, are as follows. The candidates can refer the cut off marks till Indian Army releases the official advertisement. 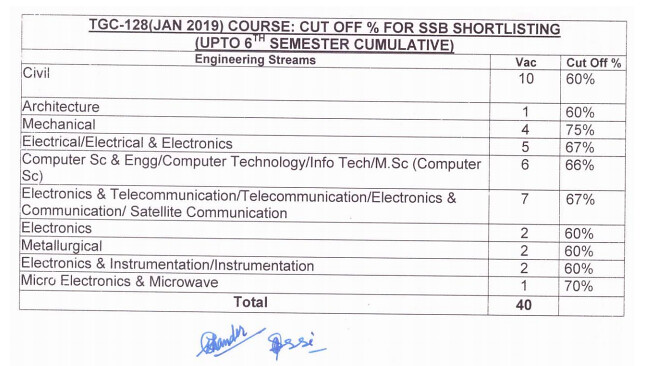