The Maharashtra Post Office Result 2017 of examination for the direct recruitment of Postman / Mailguard held on 29 Mar 2015 and another exam for MTS held on 03 May 2015 stands cancelled. Fresh examination would be conducted for these posts in Maharashtra Postal Circle for declared vacancies. The candidates who appeared earlier for the exam will be allowed to participate without fresh applications. Click Here for more information.

Total number of vacancies – As per 2015 notification

Govt job in Maharashtra is offered in several departments. Among them, job in post office is quite reputed. Candidates after class 10 and 12 look for Post Office Recruitment.

As soon as result is announced by India Post, they will be updated here. Candidates can keep checking this page and official website to know Maharashtra Post Office Result 2017. Result of Maharashtra Postal Circle Recruitment 2017 are being announced online.

The Selection will be made on the basis of a common Merit list for Postman & Mail Guard / MTS in the Aptitude test for Maharashtra circle (Maharashtra State & Goa State) as a whole.

The allotment of selected candidates will be made as per their choice/ preferences of the divisions & Merit Position. The applicants who do not mention preference of any divisions or in case of non availability of vacancies in the preferred division, the applicant will be allotted to any other division where vacancy available, after allotment of candidate who have made clear option for the divisions.

If two or more candidates secure equal marks in Aptitude Test and they are standing in the last position in the merit list, then it is clearly stated that the candidate senior in Age will be considered for selection. 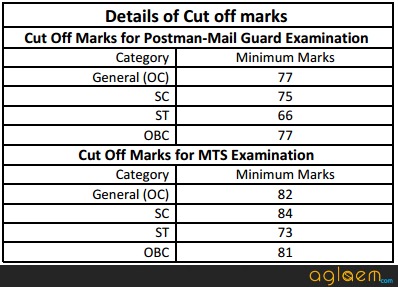