After the RRB ALP CBT 2, the selected candidates will be called for the Aptitude Test (AT), if they have applied for Assitant Loco Pilot post. However, Technician will be directly called for Document Verification. Check all the important dates for RRB ALP CBT 2 2019 from below.

Railway Recruitment Board (RRB) releases the RRB ALP CBT 2 admit card for only those candidates who qualify Stage 1 CBT. Candidates can download the hall ticket/admit card for the same from the official website, from January 17 to 19, for the January 21 to 23 CBT 2 exam. The link for the Admit Card is given above. Candidates should note that admit cards are not sent via post. It is only available on the Official Website. It is compulsory for the candidates to bring the admit card on the allotted centre and the day of examination. Candidates should also bring a govt. approved valid photo ID proof and a photograph along with the admit card on the day of examination.

The eligibility criteria to appear in stage 2 CBT is quite simple and clear. 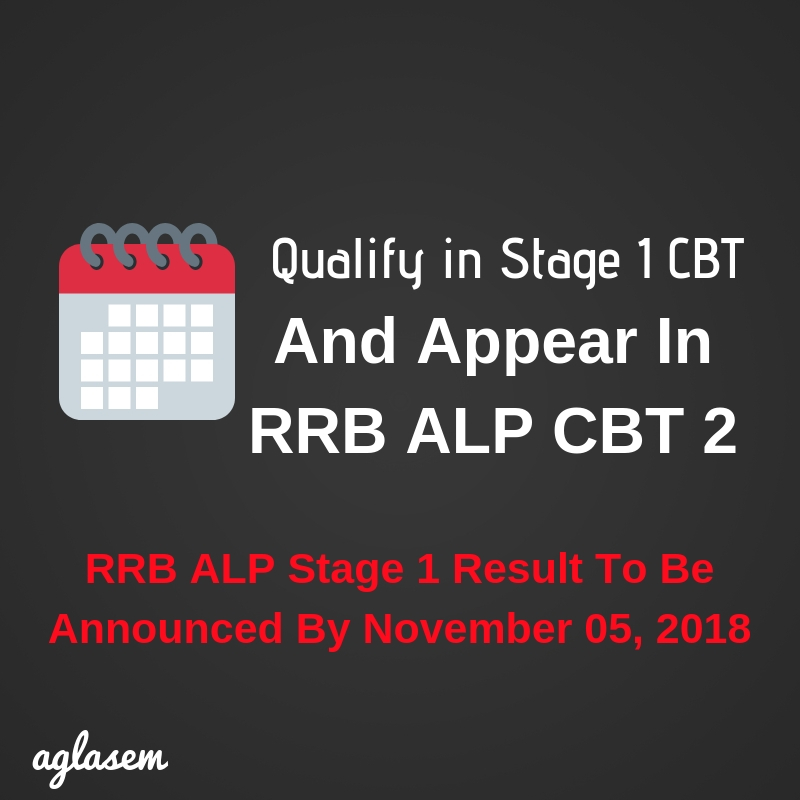 To qualify the stage 2 of RRB ALP selection process and move to stage 3, the candidates will need to achieve the following:

Qualifying marks in Part A: Candidates belonging to different categories have different minimum criteria to qualify Part A such as UR-40%, OBC-30%, SC-30%, ST-25%.

Qualifying Marks in Part B: In this, no relaxation is given. Candidates belonging to unreserved as well as reserved will have to obtain at least 35% to qualify the exam.

Note: Candidates should note that Part B of Stage 2 is qualifying in nature. Marks scored by candidates in Part A alone will be used to shortlist the candidates for further rounds. But it is compulsory for the candidates to qualify the Part B as well.

RRB Stage 2 exam will consist of 2 Parts .i.e. Part A and Part B. Candidates can check the syllabus of both the parts to start their preparation. The syllabus is very important to start preparing for any exam as candidates who are willing to appear for the exam gets an idea about the broad topics from which questions will be asked. It is also easy for the candidates as he/she gets to know the important topics which needs to be prepared for the exam.

In General Awareness, candidates will be tested his/her ability to solve General Knowledge Questions from the topics such as Science & Technology, Sports, Culture, Personalities, Economics, Politics and any other subjects of importance.

Now it is to be kept in mind that the part B of the CBT exam will be of qualifying nature. The important thing to note here is that Candidates with ITI/Trade Apprenticeship qualification will be required to appear in the section having questions from the relevant trade.

On the other hand, the candidates who have Degree, Diploma and HSC (10+2) having eligibility for the posts of ALP have to select relevant trade from the list of trades listed against their engineering discipline/HSC (10+2).

Candidates who have the qualification in various engineering discipline/HSC (10+2) can check the relevant trades to appear in the qualifying test listed below.

Second Stage CBT: Candidates will be shortlisted on the basis of normalization of marks scored by the candidates in the first stage. CAndidates who will be shortlisted for this round will be more than 15 times to the total vacancies released by ALP. The second stage of CBT will consist of 2 Parts Part A and Part B in which candidates have to just obtain 35% marks in part B as it is a qualifying round.

Computer-Based Aptitude Test: It will be for only those candidates who have applied for the post of ALP. In the aptitude test candidates need to obtain at least 42 marks in each of the test batteries to qualify. No relaxation will be given to candidates in this round.

The final selection, however, will be made after the document verification. Candidates whose information will mismatch with the documents in this stage will be disqualified for the post and the recruitment process.

RRB Increases the number of Vacancies for ALP And Technicians!

Earlier the number of vacancies for ALP and Technicians together was announced as 26,502. However, the vacancies have been revised and the increased to a total of 64,371. Check the table below for details:

The candidates will be able to check their result for the stage 2 computer-based exam online at the official website of RRB. The candidates who will be declared as qualified will be selected for the 3rd stage which will be a computer based aptitude test.

To check the result candidates have to enter their login credentials and the result will appear on the screen, whether or not they are qualified to go in the 3rd round of selection. Thus, as and when RRB will declare the result of the stage 2 exam, candidates will be notified via official circulars and they can check the result online.

Candidates who will qualify the second stage will be eligible to sit for the stage 3 Computer Based Aptitude test(AT). In Stage 3 candidates will be required to score a minimum 42 marks in each of the test batteries to qualify. In this stage, none of the relaxations will be given for any candidates and it will be applicable to all the candidates who will be shortlisted for stage 3. This stage will comprise of questions and answer options only in English and Hindi. There will be no negative marking in the Stage 3 Computer Based Aptitude Test.

Selected candidate, after all the 3 stages, will be called for document verification and will be required to be present with all the necessary documents. Candidates have to submit two sets of self-attested photocopies. Candidates are required to bring the original as well as the self-attested photocopies for the document verification. Candidates also have to upload the scanned copies of documents prior to the date of Document Verification on http://www.rrbdv.in in the prescribed format.

The merit list of RRB ALP will consist the names of only those candidates who have cleared the aptitude test. 70% of the marks obtained by the candidates in Part A of the Second stage of CBT and 30% of marks secured in Computer Based Aptitude Test (AT).

If in case, two or more candidates score the same marks, then their merit position will be determined on the basis of Age Criteria, the Older candidate will be given preference over the other. Appointment of the selected candidates will be based on the requisite medical fitness test which will be conducted by the railway administration.