Candidates who applied in response to Advt. no. 184 for Fireman and other posts, or Advt. no. 185 for Junior Accountant, or Advt. no. 186 for Clerk Grade II have appeared in online examination as per schedule. Declaration of Rajasthan Nagar Palika Recruitment DLB Result 2016 will be done by Swayat Shasan Vibhag or Rajasthan Department of Local Self Government (RAJDLSG).

CMAR Result 2016 declaration and the Recruitment DLB exams are as follows.

The online examinations were conducted in the months of March, April, May 2016. Result of Rajasthan Nagar Palika Recruitment DLB 2016 is being announced now that all the exams are over.

Similar to the release of admit cards online, the CMAR Result 2016 are also being published online.

** The exam for few posts will happen across different dates/batches owing to high number of Applications.

The exam date of Rajasthan Nagar Palika 2016 Recruitment DLB have been announced and indicated in the above table. As for the results, it has not yet been notified that when the result will be published. The dates indicated in the third column under “result declaration date” are given as expected dates, assuming that it will take at least one month for the results to be compiled and published.

The official websites where details are being updated are as follows.

Recruitment of candidates will be subject to them clearing cut off marks for particular category. Furthermore, they will have to present relevant documents to verify their eligibility.

As of now only one round of selection is known, the online exam. If CMAR or Rajasthan Nagar Palika or RAJDLSG decides to hold additional rounds of selection (written or interview), relevant details of the same will be known once the results are declared.

The scores of candidates taking up the examination will be subjected to a Normalization Process called EquiPercentile Equating (which is a widely adopted and internationally accepted method of score normalization in multi-batch examinations). The percentile ranks so derived & equated will be used as input criteria to finalise the merit list.

The procedure of checking results is expected to be similar to that of downloading admit cards. Although exact steps to check result will be known once the same is available, an expected list of steps anticipated to be useful for the process are given below.

There is another possibility that instead of login → check result, result might be published as a PDF file containing roll numbers of all the candidates who appeared for the exam. In that case, candidate can do the following.

Before checking the result, candidate must know the following details. 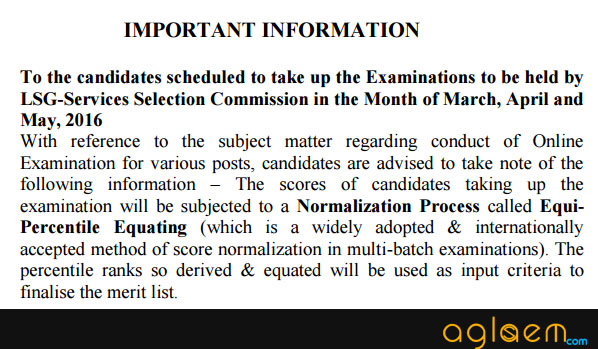 A large number of candidates have applied for the CMAR 2016 Recruitment. The examination for same post is being held on more than one days. For example, the Clerk Grade II exam will be on 5, 6, 12, and 13 March 2016.

The question papers of each date will be different to give a fair and level competition. This may lead to slight differences in difficulty level on each day. To ensure that comparison of marks is fair, marks will be normalized by using the EquiPercentile Equating procedure. This method is used by other exams also where exam is held in more than one sessions or dates.

Normalization of marks will be done after test on all dates are concluded for the same post.

Merit ranking of candidates will be done on the basis of normalized marks.

For recruitment to clerk, JA, fireman, and other posts in Rajasthan Nagar Palika, Rajasthan Department of Local Self Government (RAJDLSG) / City Managers’ Association of Rajasthan (CMAR) is organizing the examination. It is expected that official answer keys will also be released after the examination. Expected cut offs are going to be possibly released by several coaching centers and experts. The following factors play an important role in determining qualifying cut off marks.

Names of posts and respective number of vacancies

This page is being updated with details of the Rajasthan Nagar Palika Result 2016 / CMAR Result 2016 / Recruitment DLB Result 2016. If you have any queries, please ask in comments below.