The official answer key for the paper is released after a long time of the commencement of the exam by the UPSC. You can cross-check answers by using NDA Mathematics Answer Key 2019 and predict the estimated scores.

NDA Math Answer Key Set B by Aim and Achieve 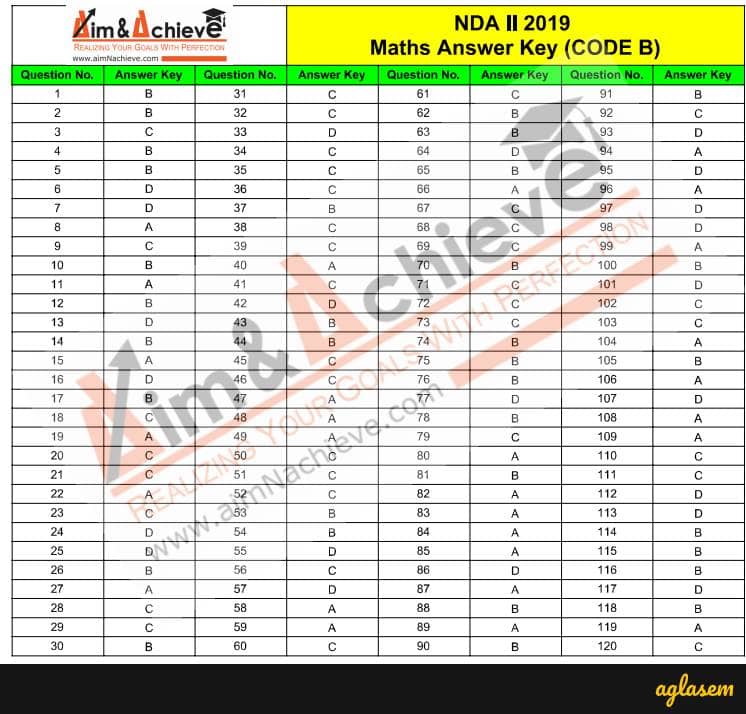 Now, the second most important thing is how to use the official answer key to estimate your score. The very first thing need is that candidates must download the answer key.

Now, a candidate must know the marking scheme and formula to calculate the marks as per UPSC:

UPSC publishes the result for the NDA Mathematics Set B 2019 on the official website. Candidates waiting to check the result can visit upsc.gov.in as per the scheduled date of announcing the result. The result is published in PDF format only. And it contains the roll number and their names alongside of the selected candidates. Candidates need no login credentials to check the result on the website. The candidates who make to the merit list of the commission are done on the basis of a minimum 25% marks in each subject as a cut off decided by the union.

The Union Public Service Commission (UPSC) is India’s central agency. It has the authority to conduct various examinations out of which are National Defence Academy Examination, Naval Academy Examination. The examination is a written offline exam to be qualified by candidates in order to be selected for the interview and personality test conducted by the Services Selection Board (SSB) commonly known as SSB. This year UPSC has announced 415 vacancies for NDA 2 2019. Out of which the vacancies for NDA are 370 and that for NA are 4.5 The exam for  UPSC NDA NA 2019 is to be conducted on November 21 2019.

Let us know your feedback on NDA Mathematics Answer Key 2019 Set B in comments below.

Best of luck for your result!

Click here to download answer key of NDA 1 2019 Mathematics Set B PDF. Or watch the video below.

NDA 2020 Application Form Withdrawal: Know How You Can Withdraw Your Form & Last Date