NDA Mathematics Answer Key 2019 Set C – On this page the candidates can check the NDA 2 Answer Key for Mathematics Sect C of exam held on November 17, 2019. The answer key of NDA 2 exam that are released on the same day of the exam are unofficial in nature. However, the official answer key are released too, later on. Using the NDA Mathematics Answer Key 2019 Set C, you can estimate marks out of 300 by using the NDA Maths Set C Answer Key before the declaration of result. To calculate the score use the marking scheme of the exam that is +2.5 for the correct answer and -2.5/3 for an incorrect answer. More details on this page below.

Candidates can get the unofficial answer key just after the exam from the page below. The official answer is released after a long time by UPSC. So aglasem tries to find the closest correct answer for the candidates to calm their eagerness. You can access the unofficial key from the page below just after the exam to calculate the probable score before the NDA 2 Result 2019 is out. 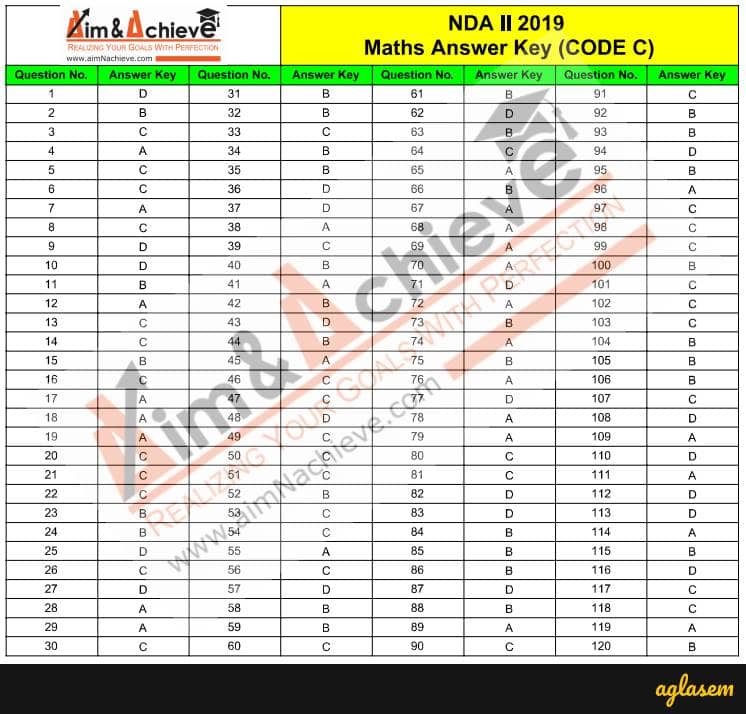 How to Calculate the Score Achieved in NDA Mathematics Set C Paper?

To calculate the score the candidates need both the marking scheme and correct answers to the questions. And both are being provided on this page below. Candidates can avail them easily and calculate the marks obtained. However, the exact marks will only get to know after the official answer key only.

Step 1: Candidate has to compare the answers marked in the question paper with that to the answers in the answer key.

Step 2: Check all the correct answers and wrong answers marked by you in the paper.

Step 4: Add all them together and deduct the negatives from the positives and resultant sum will be the marks achieved in the paper.

Candidates can check the result of NDA 2019 at upsc.nic.in as per the announcement. Qualified candidates need to attend SSB interview. Then those who qualify are selected for Army, Navy and Air Force wings of the NDA for the 144th Course, and for the 106th Indian Naval Academy Course (INAC).

National Defence Academy (NDA) examination is conducted by Union Public Service Commission (UPSC) twice in a year. The applicants who have passed 12th standard are eligible to apply for the National Defence Academy (NDA).  The selection of the aspirants in the NDA is done on the basis of offline examination (pen and paper based), Service Selection Board (SSB) Interview and Medical Test. The candidates who only qualified 12th standard those are trained in the Academy for 03 years ending in graduation with BA/BSc or BCs (Computer Science) degree from Jawaharlal Nehru.

Let us know your feedback on NDA Mathematics Answer Key 2019 Set C in comments below.

Best of luck for your result!

NDA 2020 Application Form Withdrawal: Know How You Can Withdraw Your Form & Last Date