by Anand Meena
in Defense 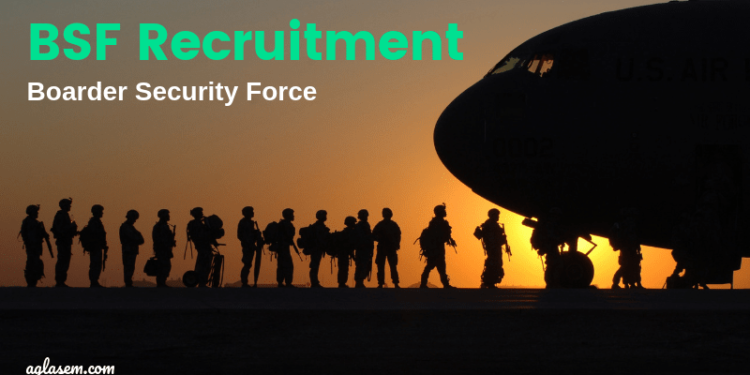 BSF Recruitment 2022: The Border Security Force is commonly known as BSF is an organisation under the command of the Ministry of Home Affairs established for the security of the borders of the country. The recruitments of the vacancies in BSF are done through a written exam after the applications are scrutinised, then candidates are called for physical standard test and physical efficiency test. After the physical test, candidates are called for a detailed medical examination. Candidates who clear the detailed medical examination are considered for the purpose of the recruitment as per the vacancies. Below is the article covering information about BSF and BSF Recruitment 2022.

The Border Security Force was established by the central government of India for the security of the borders of the country. This organisation was formed on the first December of the year 1965 during the Indo-Pakistan war. It is one of the seven forces Armed Police Force. The force has more than 100 boats and 22 aircraft. Below is the list of recruitments notified by BSF:

Before the Indo-Pakistan war, every state had the responsibility of safeguarding the borders of the state. However, during the war with Pakistan, the state governments were unable to maintain the level of security needed at the time of war. Hence, the central government formed a centralised force for guarding the land of the border at the time of war as well as in the peacetime. The force was formed and became effective as on December 1, 1965. The force is a union government agency that works under the Ministry of Home affairs. Below are the engagements have been done since the formation of the force:

Below is the list of all the honours that have been received by the personnel serving the force:

BSFWWA also known as Border Security Force Wives Welfare Association is a welfare society registered and established in the year 1992. The president of this society is always the wife of DG BSF and the wives of Special DsG/ Additional DG of BSF are the senior vice president of the society. The association focuses on the welfare of the retired members of BSF and their families, rehabilitation of widows, training to the families of forces for economic strength.

The forces of BSF are also in demand for the security purpose all over the world. Therefore, BSF personnel are regularly deployed to various peacekeeping mission of the United States. Below is the list of all the mission and the number of personnel deployed for the mission:

Listed below are some of the major welfare activities for the personnel of BSF as well well as for the public in general of the border security force:

The BSF Education Fund registered under society act 1956 runs a diploma course of Electronic and communication engineering which is called BSF Polytechnic. The course is run only for the wards of BSF personnel as a welfare measure. It is a 3-year diploma course in computer engineering and electronics and communication engineering. The institute has completed 39 years of existence. The admission for this course is done the basis marks obtained by the candidates in the 12th class for science + maths stream. There are a total of 60 seats for each of the courses.

The force recruits for the following post and the educational and the qualifications of the post are also listed here:

Constable: The person applying for the post of constable must of age between 18 to 23 years and should have passed 10th class from a recognised board.

Sub-Inspector: A person must be of age between 20 to 25 years of age and must have a graduation qualification form a recognised university or its equivalent.

Assistant Commandant: The age limit for assistant commandant is 20 to 25 years of age with a graduation degree for a unversity or institute well recognise and must be in possession of NCC B or C certificate, or outstanding achievements in sports or athletics will be an added qualification.

Assistant Commandant (Technical): The person applying for this post must have graduation qualification from with B.Sc.(Physics, Chemistry & Mathematics) and above education qualification with the Electronics stream are deputed for appointment in the rank of Assistant Commandant (Technical) form the executive posts, after they undergo Battalion Signal Officers Course. These officers later on work in higher posts in Communication hierarchy in BSF, apart from performing General duties in various ranks, since Communication Officers are also part of General Cadre of Officers.

Assistant Sub Inspector (Radio Mechanical): The age limit for this post is not less than 18 years and not more than 25 years of age. Also, the candidate must have cleared 10th class nad has 3 year Diploma in Radio and TV technology / Electronics / Tele-Communications / Computer / Electrical / Mechanical / Engineering / Domestic appliance from an Institution recognized by State/Central Government or 10+2 or Intermediate or equivalent with Physics, Chemistry and Mathematics, having 50% marks in Physics, Chemistry and Mathematics from a recognized Board

Head Constable (Operator): One must be of age between 18 to 23 years with 10th class qualification and two years ITI certificate in Radio and TV/ Electronics or Intermediate or 10+2 or equivalent with Physics, Chemistry and Mathematics from a recognized Board of Education.

Head Constable (Fitter): The age of the candidate for this psost musy be between 18 to 23 years and education in two years ITI certificate in engine/fitter/Diesel Mechanic/Automobile/Motor Mechanic from an Institution recognized by State/Central Government or equivalent or 10+2 or Intermediate or its equivalent with Physics, Chemistry and Mathematics after clearing 10th class.

Below is the pay scale of all the recruitments done by the Border Security Force: